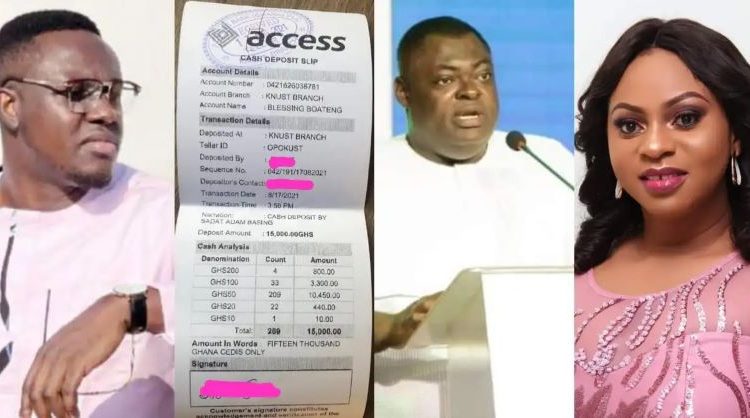 A Staff of the Narcotics Control Commission (NACOC), one Blessing Boateng, has been fingered along with Aide to Sarah Adwoa Safo, Dome Kwabenya Member of Parliament, one Nana Dubin Kwapong, for allegedly defrauding tens and hundreds of people over recruitment into the security service from 2021 to date.

From at least July 2021, the two along with other yet-to-be-identified accomplices allegedly run a recruitment ring where unsuspecting Ghanaian youths eager for jobs in the Immigration, Customs, Police, Fire and Prisons Services were made to part with amounts ranging from Gh¢10,000 to as much as Gh¢20,000 for supposed “Protocol Recruitment”.

The duo charged bigger amounts for Customs and the Police service while the least charge was for Fire and Prison Service.

Records obtained by MyNewsGh.com showed NACOC’s Blessing Boateng used his Access Bank Account Number 0421626038781 to receive proceeds which then goes to Nana Dubin after Blessing has made deductions.

Several Documents available to MyNewsGh.com indicate the recruitment syndicate was unofficially operated from the office of the Member of Parliament for Dome Kwabenya Constituency, Adwoa Safo, whose absence from the country for several months was exploited by her Aide to his advantage in the recruitment saga.

At some point when the victims realized they might have been scammed, some of them told MyNewsGh.com that Nana Dubin allegedly informed them the absence of his boss, the MP from the country is why their names were not in the first batches of recruitment announced by the various services in 2021.

Nana Dubin who held calls, chats and in some cases meetings with aggrieved victims said a second batch of recruitment list would be released in 2022 and they should calm down.

Verified Documents, bank and Mobile Money Transaction Records as well as Whatsapp Chats and Audios in the possession of MyNewsGh.com shows the scam was operated and led by Nana Dubin Kwapong and Blessing Boateng who together made approximately more than Gh¢230,000 from unsuspecting victims.

A list made available to MyNewsGh.com shows the full names of recruitment scam victims, amount paid and the service of choice for the supposed protocol recruitment.

Investigations are yet to establish whether the MP, Adwoa Safo knew about the activities of her Aide since MyNewsGh checks show as then Deputy Majority Leader, Adwoa Safo was officially allocated protocol slots by the Immigration and other services every year. This stopped when she became Minister of Gender and Children’s Protection.

MyNewsGh.com is undertaking further investigations to establish whether the protocol slots the MP was given was sold by her Aide and whether she knew about it.

These revelations come 5 years after the Dome Kwabenya MP issued a public statement warning the public that her social media handle has been cloned and being used for jobs and recruitment fraud.

In her statement to caution the public, the Dome Kwabenya MP included the Mobile phone number of her Aide Nana Dubin Kwapong +233 20 825 9245 and one Daniel Appiah-Otoo as “trusted people” the public should reach out to in order to double-check any information purporting to come from her.

While the bulk of the money was received by Blessing Boateng who funneled it to Nana Dubin with evidence obtained by MyNewsGh.com, the lion’s share went to Nana Dubin.

Following the failure to secure the slots for the victims, Nana Dubin held various group call sessions with the victims to assure them a second batch should be expected in early 2022 which will include them but which also failed to materialize.

The Dome Kwabenya MP Aide had since been assuring the victims he would pay their money to no avail.

Police reports are currently been made for the two to be arrested as soon as possible.