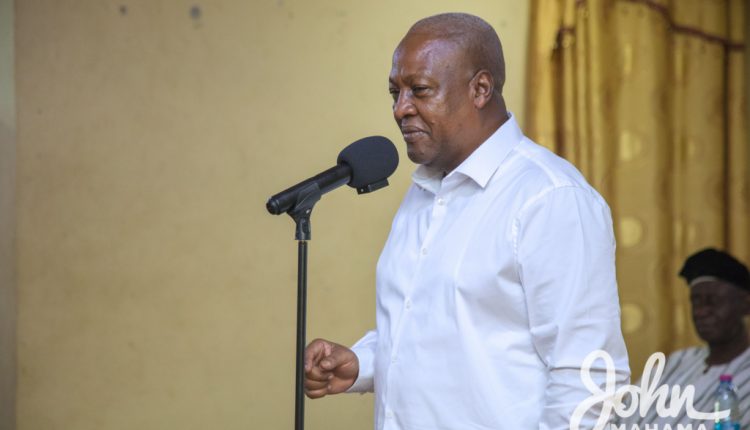 Former President Mahama has asserted that the Akufo-Addo government was in a state of self-denial for far too long as regard the resort to the International Monetary Fund (IMF) for economic assistance.

He said the delay in seeking help, when it was obvious that the country needed one, has caused significant damage to the economy.

“After a lengthy period of living in denial and plunging the economy into unprecedented doldrums, government finally decided a few weeks ago to request for an IMF programme.

They left the decision so late that substantial damage had been done to the economy by the time the call was finally made. Inflation stands at a 19 year high of almost 30% for June and is almost set to rise. Our deficit and revenue targets have so far been badly missed and we are most likely to post yet another double-digit deficit at the end of this financial year,” he said at a workshop attended by members of the Minority Group in Parliament held on Sunday.

Mr. Mahama bemoaned the fact that, “ Indications from the data collection exercise of the IMF team that visited Ghana last week are that government has up to GHS 40 billion in arrears and contingent liabilities in addition to the official public debt of about GHC400 billion.”

The former President this is believed to have increased the country’s debt to GDP ratio over 90%.

“Our ability to meet our debt service obligations remains tenuous with Ghana ranked as the country with the second highest likelihood of debt default in the world after El Salvador. It is no secret that our foreign currency reserve position is extremely precarious. This leaves us vulnerable unless there is an urgent injection of additional foreign exchange inflows,” the 2020 NDC flagbearer posited.

He contended that against this background, “the economic hardship is set to remain for an extended period.”

He described Vice President Dr. Mahamudu Bawumia’s speech at the Accra Business School as light-hearted, “Amid this gloomy outlook, those responsible for the mess refuse to exhibit contrition and sobriety. One of the key architects of the failed policies and mismanagement that have led to our economic downfall and suffering, found it necessary a couple of days ago, to put up a public display that verged on the ridiculous and comical.”

He noted that elsewhere, Dr. Bawumia would have resigned, “In a government where honour and responsibility are respected, the Chair of the Economic Management Team that has thrust us into this crisis would have stepped down or be dismissed.”

“In fact, the very idea that this government has requested for an IMF programme would have been sufficient reason for him to go in view of all the unenlightened propaganda he dabbled in against our IMF programme of 2015. Rather, he has chosen to show a gaping deficit in leadership attributes by making untenable excuses and seeking to shift blame onto the government that left power almost six years ago and which had no role to play in the poor policy choices that have delivered these disastrous outcomes,” Mr. Mahama concluded.

NDC explains delay in its elections; says it is ready to take over power from NPP