Ghanaians have been advised to brace themselves for further hardships this year due to the government’s ongoing debt restructuring programme and other policies.

This, according to the Ranking Member on Parliament’s Finance Committee Dr Cassiel Ato Forson, is because the programme will compel the country to record one of the worst non-oil GDP growths in the nation’s history.

According to him, the debt exchange programme will have a negative impact on the economy which will in turn bring hardships on the citizenry.

In a Facebook post on Tuesday, January 3, Dr Forson added that the “haircuts” on domestic and Eurobonds will also have an adverse impact on the banking sector and local businesses.

“This year, Ghana’s economy will record one of the worst non-oil GDP growths due to the impact of the debt restructuring and a plethora of extremely tough fiscal and monetary policies.

“The haircut on domestic bonds and Eurobond is expected to adversely impact the health of the banking sector, local businesses, and individuals! Also, Bilateral debt restructuring will lead to government’s foreign financed projects being abandoned,” the Ajumako Enyan Essiam MP said.

The former Deputy Finance Minister also said there will be mass layoffs this year.

He attributed this prediction to the government’s freeze on employment for the year.

“Unemployment will worsen due to the freeze on employment, debt restructuring, poor business climate, and massive austerity.

“Ghana will default in the payment of interest and principal on domestic bonds, Eurobonds, and most of our bilateral loans in 2023. 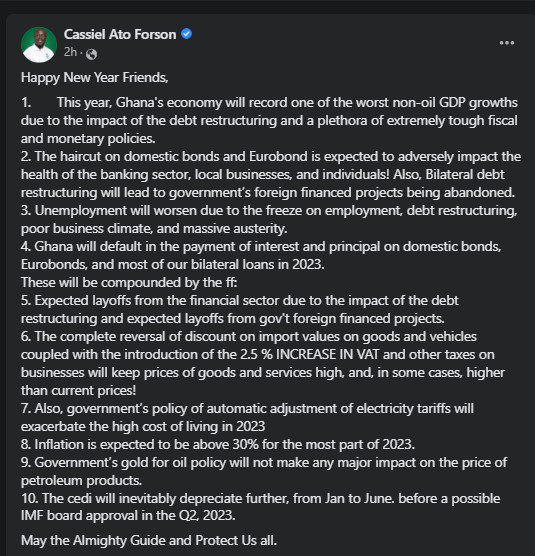