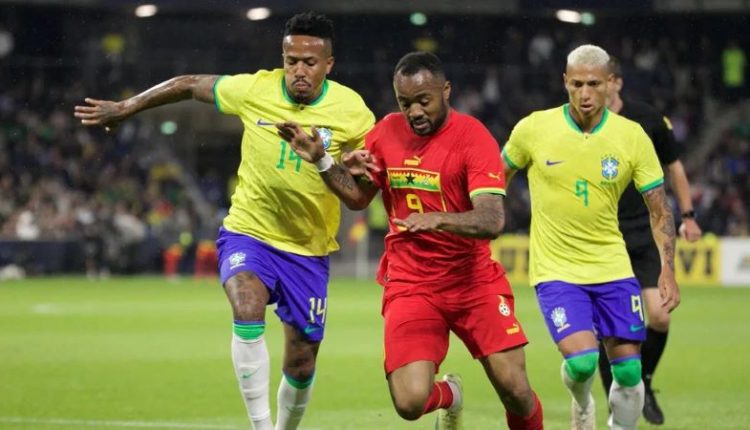 WHAT HAPPENED? Ghana suffered a 3-0 defeat in the hands of five-time world champions Brazil during a friendly match at the Stade Oceane in Le Havre, France on Friday.

The game was over as a contest in the first half. Brazil took a 3-0 lead following Marquinhos’ ninth-minute header when he met Raphinha’s corner unmarked in the box before Neymar and Richarlison combined twice, the Paris Saint-Germain man teeing up the Tottenham Hotspur striker to make it 2-0 in the 27th minute.

Neymar then whipped in a corner for the former Everton forward to head in the third.

While Brazil fielded a star-studded lined up, Ghana coach Otto Addo resisted the temptation of starting with the players who committed their international future to the Black Stars in June, going for the tried and tested with Inaki Williams, Tariq Lamptey and Mohammed Salisu all starting on the bench.

Ghana switched to a back five after the break with Williams and Salisu introduced and they gained a foothold in the game, almost pulling one back when Andre Ayew’s bullet header hit the crossbar from Mohammed Kudus’ corner.

THE BIGGER PICTURE: Ghana have now fallen short in three straight matches when coming up against World Cup-bound opposition, the defeat against Brazil following on losses to Chile and Japan in the Kirin Cup in June, and having missed the 2018 World Cup, Addo has a big job to ensure the 2022 tournament does not end in a group stage exit.

ALL EYES ON: Kudus has been in impressive form for Ajax, scoring six goals in five matches, but struggled to get going in the game. Williams, Lamptey and Salisu all made their Black Stars debuts after coming on in the second half.

THE VERDICT: The gulf in class between Brazil and Ghana was laid bare and the Black Stars are still far from a World Cup team. They will need to up their game quickly before heading to Qatar where Portugal, Uruguay and South Korea await in Group H.

WHAT NEXT FOR GHANA? Ghana will take on Nicaragua, ranked 139th in the world, in their next friendly match at the Francisco Artes Carrasco Stadium in Lorca, Spain on September 27.

Who is Kudus? All you need to know