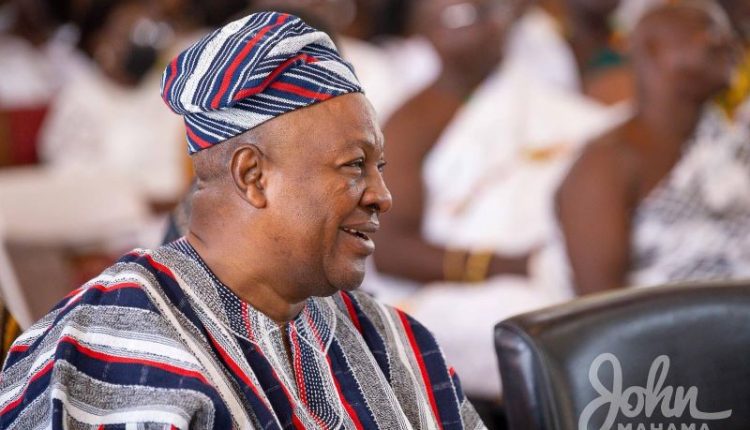 Ghana is an island of religious calmness – Mahama

Ghana is an “island of religious calmness in a sea of turbulence as almost all our surrounding neighbours have, in recent times, experienced some major form of insurgency, coup d’état or other conflicts, including religious conflicts”, former President John Mahama has told the world.

“In all these acts, one thing is clear, leadership at all levels including the family, the school, the church, and the government all have the responsibility to educate and inform the impress young members of our society about the imminent threats and dangers out there”, the former Ghanaian leader said when he spoke as a special guest of honour at the 2022 Convocation at Liberty University in Michigan of the United States on Thursday, 6 October 2022.

To avert the recruitment of young people into terrorist organisations, however, Mr Mahama said there was a need for the government to create enough jobs to absorb the unemployed.

The “government owes it as a responsibility to do all they can to secure the peace and safety of the nation, but above all to, reduce youth unemployment”, Mr Mahama pointed out, adding: “This is necessary to ensure that the young people do not become easily recruitable to fill the ranks of the insurgence due to frustration and lack of opportunity”.

Mr Mahama used the opportunity to condemn the activities of Boko Haram in the sub-region.

On 8 February, Security Council members held closed consultations on the situation with Annadif. In a 9 February press statement, Council members expressed serious concern about the unconstitutional change of government in Burkina Faso and their support for regional mediation efforts.

The coup leader, Lieutenant Colonel Paul-Henri Sandaogo Damiba, was sworn in as transition president on 16 February. On 1 March, Damiba signed a charter outlining a 36-month transition.

At an ECOWAS summit in Accra on 4 June, ECOWAS appointed the former president of Niger, Mahamadou Issoufou, as ECOWAS mediator for Burkina Faso.

Violence has intensified in Burkina Faso, despite the military’s ouster of Kaboré.

On 11 June, Burkina Faso suffered one of its worst massacres during the seven-year jihadist insurgency when militants killed at least 79 people in the northern town of Seytenga. Previously, on 25 May, about 50 people were killed in Madjoari, eastern Burkina Faso, reportedly by extremist groups.

ECOWAS also continues to lead international efforts to promote the restoration of constitutional order in Mali since the coups d’état in August 2020 and May 2021 and in Guinea after a coup d’état in September 2021.

ECOWAS has maintained the economic and financial sanctions it imposed on Mali on 9 January after the transitional authorities failed to comply with the initial 18-month calendar for organising elections that they had agreed with ECOWAS.

On 25 March, ECOWAS rejected Mali’s proposal for a two-year extension of the transition, but transitional president Assimi Goïta signed a decree on 6 June extending the transition by this period, with effect from 26 March. While expressing regret over this decision, ECOWAS said its mediator would engage with the Malian authorities to “find a mutually agreed timeline”.

Tensions between Mali’s transitional authorities and France, partly over the authorities’ alleged partnership with the Wagner Group, the Russian private security company, came to a head in February when France and other European countries decided that over the following six months they would withdraw their counter-terrorism operations in Mali, Operation Barkhane and Takuba Task Force.

In a 17 February joint statement on the planned departure, France, Canada and 23 other European and African countries said that they would “continue their joint action against terrorism in the Sahel region”, focusing on Niger and West African coastal countries, and that they had begun consultations to determine the form of this cooperation.

On 15 May, Mali announced it was ending its participation in the Group of Five for the Sahel Joint Force (FC-G5S) that Burkina Faso, Chad, Mali, Mauritania, and Niger (G5 Sahel) formed in 2017 to combat terrorist groups in the region.

According to transition authorities, Mali was withdrawing from the FC-G5S because, since February, some G5 countries had blocked its assumption of the rotating presidency of the G5 Sahel.

The military junta in Guinea, whose members have been subject to ECOWAS financial and travel ban sanctions since last year, said it would not enforce the new ECOWAS sanctions on Mali.

Guinea’s National Transitional Council, established on 22 January as an interim legislative body, approved a 36-month transition period on 11 May.

At its 4 June summit, ECOWAS expressed “serious concern” about tensions between the military junta on the one hand and civil society and the political opposition on the other over the management of the transition.

It also said it was concerned about the three-year transition period and demanded the finalisation of an acceptable timetable.

Nigeria is facing multiple security crises. Around 2.2 million Nigerians are internally displaced because of the protracted conflict in the Lake Chad basin with the terrorist group Boko Haram and a splinter group, the Islamic State, in the West Africa Province.

Banditry and intercommunal violence have driven an emerging food crisis in northwest Nigeria.

There has also been heightened concern about terrorist groups increasing their presence and recruitment in northwest Nigeria amid this insecurity.

In an 11 May attack, the Al-Qaida-affiliated Group for the Support of Islam and Muslims killed eight Togolese soldiers and wounded 13 in an attack on an army post in the town of Kpekankandi in Togo near the border with Burkina Faso.

It was the first deadly attack by jihadist groups in Togo.

Overall, violence and rising global food prices are driving a deteriorating humanitarian situation in much of the region.

As of 20 May, up to 18 million people in the Sahel are expected to face severe food insecurity over the next three months, according to OCHA, which warned of alarming levels of food insecurity in Burkina Faso, Chad, Mali, and Niger, during the lean season between June and August.

The UN, the AU, ECOWAS, and the G5 Sahel have launched a joint strategic assessment of security and governance in the Sahel.

Former President Issoufou of Niger is leading the assessment team, which held its inaugural meeting in Niamey on 21 June.

On 31 May, the Council adopted resolution 2634 on piracy and armed robbery in the Gulf of Guinea, which Council members had been negotiating since January.

The resolution requests a Secretary-General’s report on Gulf of Guinea piracy within five months, including an analysis on any possible and potential linkages with terrorism in West and Central Africa and the Sahel.