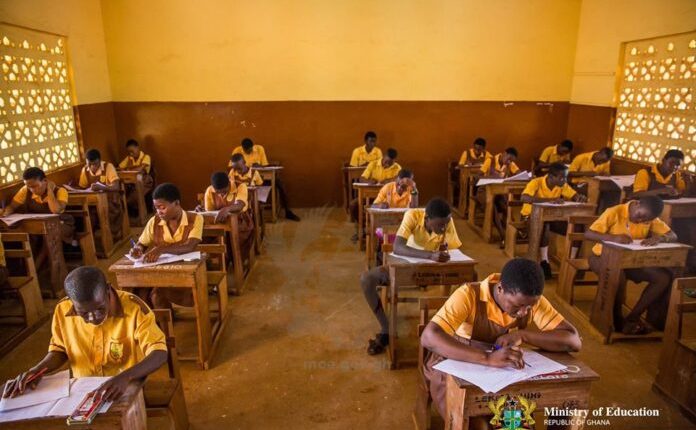 The Mfantseman Municipal Education Directorate has justified the action by an invigilator that led to a BECE candidate defecating on herself in the exam hall.

According to the Municipal Education Director, Mr Cobbod, the invigilator was only applying the GES rules and regulations.

Speaking in an interview with EIB Network’s Central Regional Correspondent, Yaw Boagyan, the Director said, it is against the WAEC rules to allow Candidates to go out of the examination hall less than 30 minutes after a paper has started.

Mr Cobbod added that the invigilator assumed that the student was faking her situation hence his decision to prevent her from stepping out leading to the unfortunate incident. He clarified that students can go out 30 minutes after a paper has started.

Mr Cobbod revealed that a delegation from the Education Directorate together with the invigilator will visit the Parents of the victim and render an apology.

A female BECE candidate who was taking her exam at the Mankessim Senior High School examination centre in the Central region was forced to defecate on herself after an invigilator denied her the chance to attend to nature’s call.

The incident, according to EIB’s Central Regional Correspondent, Yaw Boagyan, occurred after several pleas by the student to use the washroom were turned down by the invigilator who insisted she stays in the hall to complete her paper.

Boagyan reported that the student had been feeling unwell prior to the exam. Reports indicate that she was on medication and some of her teachers were aware of the student’s condition.

Despite pleas by some of the teachers, the invigilator ignored them and insisted that the student stays to complete her exam leading to her defecating on herself in the exam hall.

The student was forced to write the exam with faeces on herself until some angry teachers intervened.

She was whisked to the girl’s dormitory to change her uniform after some of her colleagues went to her house to bring new clothes.

The candidate was a Student of Beifikrom Basic School.

Some of the Teachers who spoke to Boagyan expressed disappointment in the Teachers behaviour and condemned him for embarrassing the student.

I can remove Akufo-Addo from office; he can’t remove me – Alban Bagbin