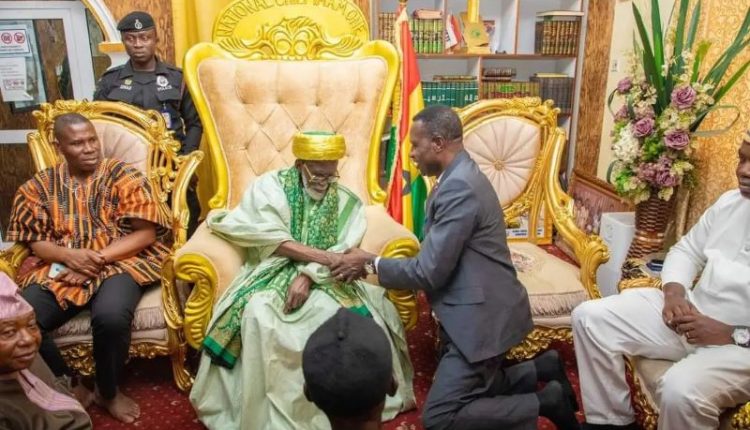 Minister for Education, Dr. Osei Adutwum who is bogged down by chop chop allegations regarding a World Bank contract has run to the National Chief Imam Sheikh Nuhu Sharubatu for cover.

The Minister who has failed to convincingly account for a US$1.2Million World Bank project paid what he called a “courtesy call” on the National Chief Imam as part of a supposed “working visit” to prominent and key personalities within the Ghanaian society.

The Minister has been criticized severely of late for pretending to be clean while surreptitiously pushing deals under the table, including the botched World Bank project cash he wanted to take when the work had not been done and he knew it.

The Minister and MP for Bosomtwe who is also lobbying very hard for consideration as Vice Presidential nominee in the New Patriotic Party is running around trying to shore up his battered public image by courtesy calls to prominent Ghanaians in society.

During these supposed tours, which is happening at a time Second cycle institutions are facing food crisis and lower tier schools lack textbooks, the Minister using state resources and fuel is embarking on these tours to share and brief the personalities on the various reform initiatives being undertaken by his Ministry and also solicit fresh ideas on ways to help transform Ghana’s Education to meet the 21st Century global demand, he claimed.

While ignoring CHASS which is a key stakeholder, he said during his visit to the Chief Imam, he took the opportunity to outline the measures put in place to solve the food situation in our schools and that he received “fresh ideas for Ghana’s Education transformation from the National Chief Imam”.

Dr. Adutwum has transformed from an admired clean man to one whose name is associated with deals that hurt the image of the government in the anti-corruption fight.

Beyond the World Bank cash, Dr. Adutwum was one who chaired the Entity Tender Committee that awarded a controversial Mathematical Sets contracts that was the subject of a National Security investigation and arrests.

The contract which had the Nigerian wife of Secretary to the President Nana Asante Bediatuo involved was revoked after the parties allegedly disagreed over the sharing of the money from the contract.