Ukrainian Deputy Prime Minister, Mikhailo Fedorov posted a photo on Twitter on Monday showing that the US space exploration technology company (SpaceX) sent a vehicle to Ukraine. The truck is full of Starlink user terminals. Fedorov asked SpaceX CEO, Elon Musk for cyber help during the Russian attack. Over the weekend, Mykhailo Fedorov posted on Twitter asking him to provide Ukraine with a Starlink station. Fedorov tweeted: “Russia is trying to occupy Ukraine while you are trying to colonize Mars!. While your rocket successfully landed from space, Russian rockets are attacking Ukrainian civilians!. We ask you to help Ukraine provide Starlink ground stations.”

In response, Elon Musk said that the Starlink satellite internet service has been activated for the country and more terminals will be available.

Now, that promise appears to have been fulfilled. Fedorov thanked Musk in a tweet, and Musk responded: “You’re welcome”. In order to use the Starlink system, consumers must have a user terminal – a white transceiver that SpaceX sells directly to customers. In a clear sky, the transceiver can transmit and receive signals from any active Starlink satellites above. These are the terminals that SpaceX shipped to Ukraine, although it’s not clear how many from the photos. 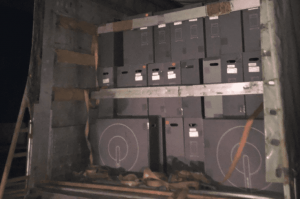 Conflicts in Russia and Ukraine have caused internet outages in parts of the latter. Through SpaceX, Musk has put thousands of Starlink satellites into Earth orbit and started providing broadband services in some areas. These satellites help transmit vast amounts of information quickly to anywhere on Earth without the need for fiber optic cables. The satellites could provide data links to areas of Ukraine that have lost internet access.

So far, SpaceX has placed more than 1,700 satellites in orbit, some of which will pass over Ukraine. However, Ukraine has no ground station that can receive Starlink network signals, the nearest ground station is in Wola Krobowska, Poland.

In addition, Elon Musk responded to a “warning” from Dimitry Rogozin, head of the Russian space agency, and promised that SpaceX would help save the International Space Station.

On Friday, after the U.S. president announced sanctions on Russia, Rogozin tweeted: “If you block cooperation with us, who will save the International Space Station from a runaway derailment to the U.S. and Europe? This requires Russian technology and expertise.”

Rogozin added: “Russian engines control the orbit and position of the space station, and it is possible that this 500-ton facility could also land in India or elsewhere. Do you want to threaten these countries with such a prospect? The International Space Station does not fly over Russia, So all risk is yours. Are you ready?”

Elon Musk joined in at this point, responding to Rogozin with the SpaceX logo. When a Twitter user asked him if that meant SpaceX would stop the ISS from falling to Earth, Musk replied: “Yes.”

ELON MUSK: SPACEX TO TAKE HUMANS TO MARS IN 5 YEARS AT THE EARLIEST