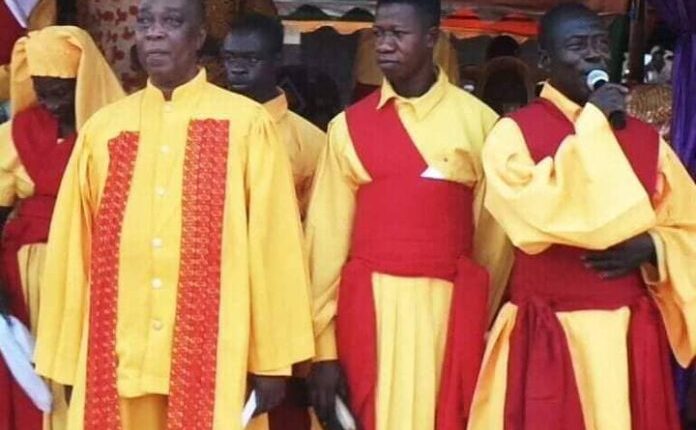 There is simmering tension in African Faith Tabernacle Church with headquarters in Akyem Anyinam in the Eastern Region over an attempt to ordain a 17-year-old as leader of the Church.

The 17-year-old boy has been nominated by the family of the late leader of the Church, Superior Prophet David Nkansah II, to succeed him as the next leader but the decision is being resisted by the Elders, Trustees, and Executives of the Church.

The family claims that the late Prophet David Nkansah II nominated the 17-year-old cousin to be ordained as the next leader of the Church when he dies.

However, the Elders, Trustee, and Executives say it is false arguing that, the boy is too young to lead the Church which has branches nationwide.

Instead, they want Chief Pastor Stephen Frimpong Nkansah who was the linguist to the late Prophet David Nkansah to be the next leader.

Due to the ongoing misunderstanding, the 40-day celebration of the late leader of the church ended abruptly after confusion broke out as the family attempted to impose the 17-year-old boy and introduce him as the next leader.

They later released a statement dated April 13, 2022, that, “In the wake of the demise of the late Superior Prophet David Nkansah II, the National Trustees, National Officers and the Regional Representatives of African Faith Tabernacle Church are pleased to announce the appointment of Chief Pastor Stephen Frimpong Nkansah as the acting leader of the Church, with effect from 7th April 2022”.

The statement described the Chief Pastor Stephen Frimpong Nkansah as a competent leader Who has broad and quite unique experience in both church leadership and doctrines.

African Faith Tabernacle Church is a renowned indigenous spiritual church founded in the year 1919 by the late prophet Kwame Nkansah. The headquarters of the Church is located in Anyinam in the Eastern Region.