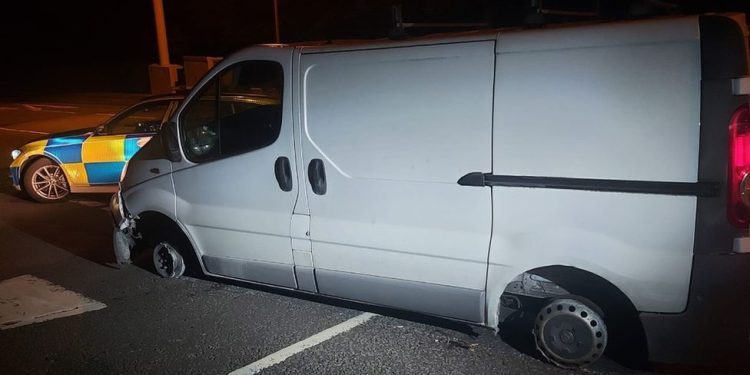 A drunk driver travelled for 10 miles down the M4 with two tyres missing after a night out with friends.

Despite being twice the limit and admitting to drink-driving, Laurie Rosser, 42, blamed Covid for making his mind “cloudy”.

Swansea Magistrates’ Court heard Rosser, from Gorseinon, had two-wheel “blowouts” on his Vauxhall van on 26 June, yet continued driving.

The court heard how motorists had seen the builder’s van travelling down the motorway, with a front and rear tyre missing, and the steel hubs worn away.

One of these reported the father-of-four to the police, who pulled him over at 02:00 BST on Sunday, 26 June, near Junction 46 of the M4 at Llangyfelach.

Police estimated the van had been driven more than 10 miles (16km) with two missing tyres.

He was breathalysed at the roadside and found to be almost twice the legal limit for driving.

Rosser had 66 micrograms of alcohol in 100 millilitres of breath – the legal limit is 35.

Rhys Davies, defending, said Rosser had tested positive for Covid after the trip and it had influenced his decision to drive the vehicle with two missing tyres.

“He tested positive for Covid the following day and said his mind was cloudy,” he said.

“That influenced his decision to drive with two defective tyres on the vehicle.

“He continued driving because he wanted to get to a place of safety off the motorway.”

The court heard the incident was a “one-off” and Rosser, who previously worked in the prison service, had no previous convictions.

Mr Davies added the defendant had drunk two pints and was “genuinely unaware he was over the prescribed limit”.

“He says having Covid influenced his decision to drive,” Mr Davies said.

“Due to the hour of the day, after suffering two blowouts, he took the decision to drive to a place of safety.”

“The highway code says if you can get off the motorway, you should always do so.”

However, prosecutor Lucy Mansfield said the drink-driving offence was aggravated by Rosser continuing to drive on missing tyres.

We will support Ghana to formulate Enhanced Domestic Programme – IMF