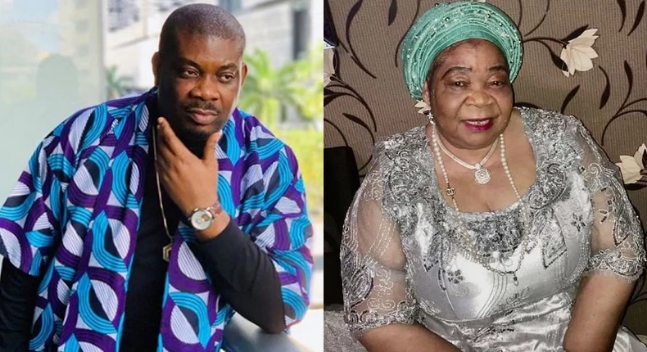 The record label boss announced the passing of his mother on his social media page.

Mavin Records head honcho, Michael Collins Ajereh popularly known as Don Jazzy has lost her mother to the cold hands of death.
The label executive broke the sad news in a post on his Instagram page on the evening of Friday, July 22, 2022.

According to Don Jazzy, the matriarch of the Ajereh family breathed her last on the morning of Friday, after a long battle with cancer.

“I lost my sweet mother this morning. The matriarch of our family. My supporter and backbone @indianpicolo. I am beyond devastated,“ Don Jazzy said.

The music producer said even though his mother’s death has left him with unimaginable pains, he’d take solace in the fact that she lived a good life.

He described the deceased as a fighter that refused to give in even in the face of a deadly health condition.
Don Jazzy then called on everybody to pray for his family, especially his dad and siblings, as they go through this tough period.

He said, “I have never felt pain like this in my life but I am consoled by the good life she lived. She was loved by everyone that ever met her. She was so strong till the last minute for us even while she battled with cancer.

I have never typed a more difficult caption in my life. Please pray for our Mums soul to Rest In Peace and for strength for my dad, my siblings, her grandchildren and our entire family to bear this loss.”