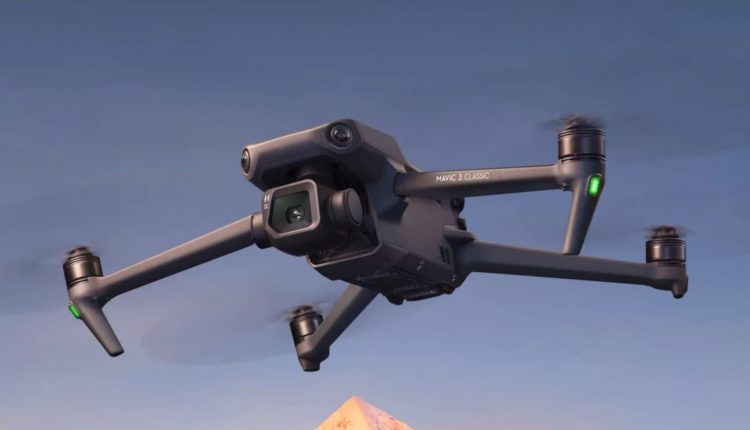 Despite the now habitual deluge of leaked specs, photos, and videos that precede the arrival of all DJI drones under development anymore, their actual launches are always red-letter occasions – and that’s definitely the case with today’s rollout of the new Mavic 3 Classic. Indeed, ambient excitation may be even greater this time around with the release making most of the tech in DJI’s top-of-the-line photography Mavic 3 UAV more affordable to budget-conscious enthusiasts who’d thus far had to go without it.

The strategy of leading with a full-force, premium-priced product followed by a scaled-down and less expensive iteration has worked well for DJI – particularly with the introduction of the Mini SE, shorn of the RAW photography capacities and equipped with reduced video capacities of the Mini 2. The Mavic 3 Classic follows the same logic in extending the Mavic drone series with a lower-priced version ­– though this time with limited downscaling of hardware and features.

For bottom-line starters, the cost of a Mavic 3 Classic on its lonesome will run consumers $1,469 – more than half a grand less than the $2,049 tag of a Mavic 3 on DJI’s purchase page. Even the drone sold with a DJI RC will run a comparatively sensible $1,749 compared to the $2,849 for the Mavic 3 Combo containing the same remote. But as significant as that softer squeeze on the billfold is, the cheaper seat at the Mavic 3 Classic table it represents is merely the amuse-gueule for the technological feast the drone will treat users to with each flight.

But what’s the downside to DJI squeezing Mavic 3 features into a less pricey and more compact Mavic 3 package? Mainly the sacrificing of the original drone’s telephoto lens and configuration of the new UAV as a single camera craft – but what a camera it is!

The Mavic 3 Classic’s biggest tech draw is packing the same 4/3 CMOS 20-megapixel Hasselblad camera the original is equipped with, shooting images with the clarity of the human eye.

It allows pilots to capture video of up to 5.1K/50 fps, 4K/60 fps, and 1080p/60fps using H.264 and H.265 encoders. Its slow-motion modes record footage at 4K/120fps and 1080p/200fps, while its adjustable aperture spanning f/2.8 to f/11 for 12.8 stops of native dynamic range ensures bold, well-defined images, no matter what kind of lighting. In lower luminosity settings like dawn or dusk, a night shot mode produces clean video by reducing the distorting effects of less light. 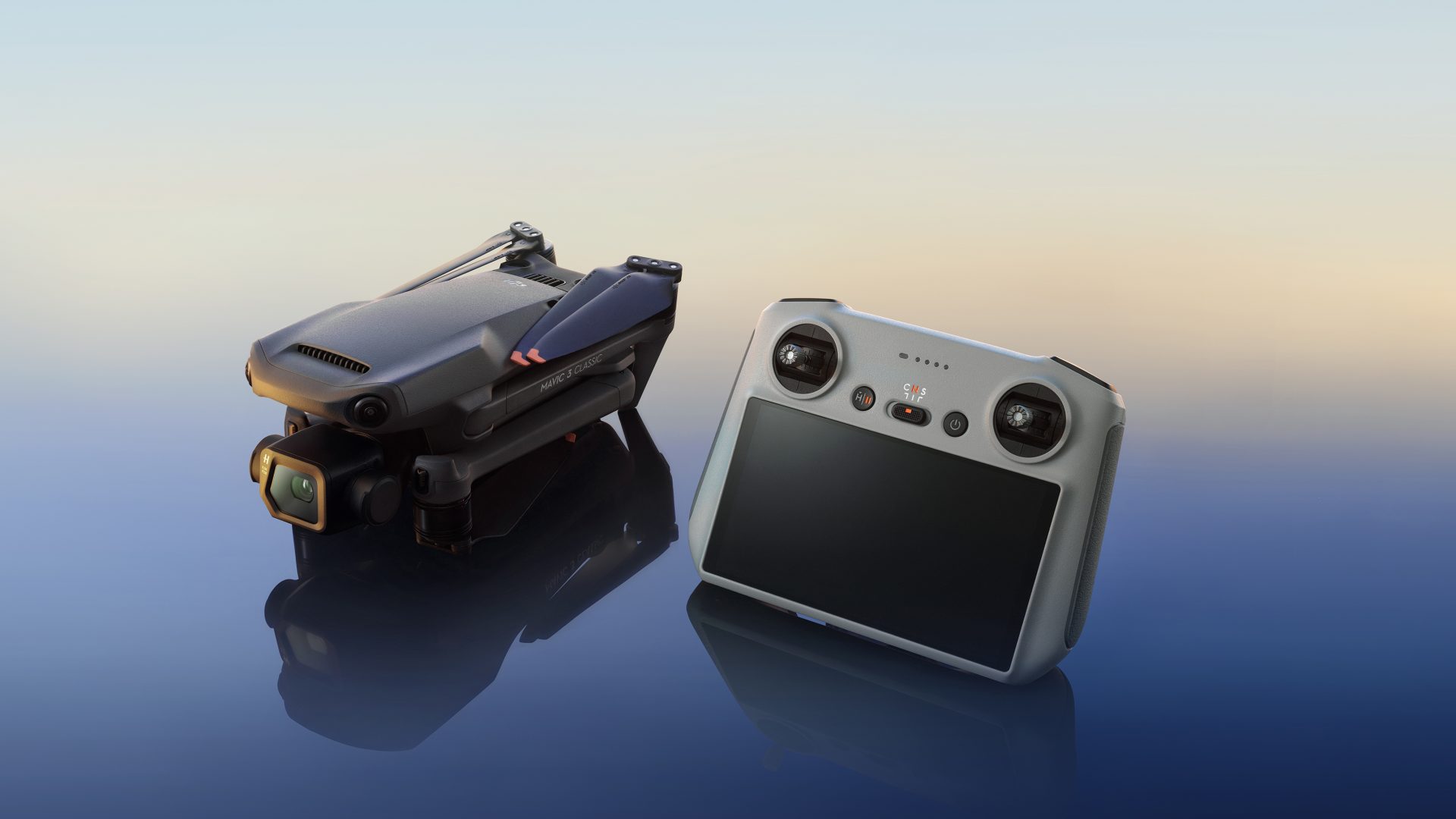 Just like its more expensive predecessor, the Mavic 3 Classic boasts a 46-minute maximum flying time on a single charge – upward of 30% longer than earlier models of DJI drones. It has also been designed to be compatible with batteries in the rest of the Mavic 3 series – possibly a moot point for users who’ve been priced out of Mavic 3 ownership up until now, yet still preferable to outlier status.

Once aloft, the Mavic 3 Classic’s O3+ signal transmission system will provide steady, reliable contact with the remote controller and feeds of 1080p/60fps video for up to 9.3 miles (though pilots won’t want to test that endurance without a BVLOS waiver).

As with the original Mavic 3, DJI’s newest drone can automatically track and frame subjects while controlling the camera with cinematic flight patterns. Activation of its ActiveTrack 5.0 function will identify and lock onto targeted people, animals, or objects while moving the craft and lens in sync for slick, steady, smooth video recording.

The Mavic 3 Classic also boasts DJI’s new Cruise Control that permits pilots to set a constant flight speed so they can concentrate on objects or scenes being filmed. The option is designed to reduce or eliminate jumpy video that can result from operators having to modulate the drone’s velocity while they shoot.

Raw footage captured with the Classic version of DJI’s flagship photography drone is then quickly downloaded from the craft to a mobile phone or computer for editing with the High-Speed QuickTransfer feature, using Wi-Fi connectivity of up to 80 MB/per second – and without having to plug in the remote controller – to speed the process.

Given the concerns and outright allegations that have arisen from US political and government circles in recent years – creating considerable business difficulties for DJI as a result – the company is making a point of reminding customers their data will be safe and secure using the Mavic 3 Classic, whose accessibility they alone will control.

Like all DJI products, Mavic 3 Classic is designed with data security in mind. Creators never have to share their photos, videos, or flight logs with anyone unless they choose to do so. The drone never has to be connected to the internet during flight, and transmission systems are encrypted for both the drone’s video signals and its flight controls. Even when flying high-profile photo and video assignments, DJI’s data privacy systems provide the discretion and protection that sensitive assignments demand. To learn more about DJI’s security leadership, visit security.dji.com/data/overview. 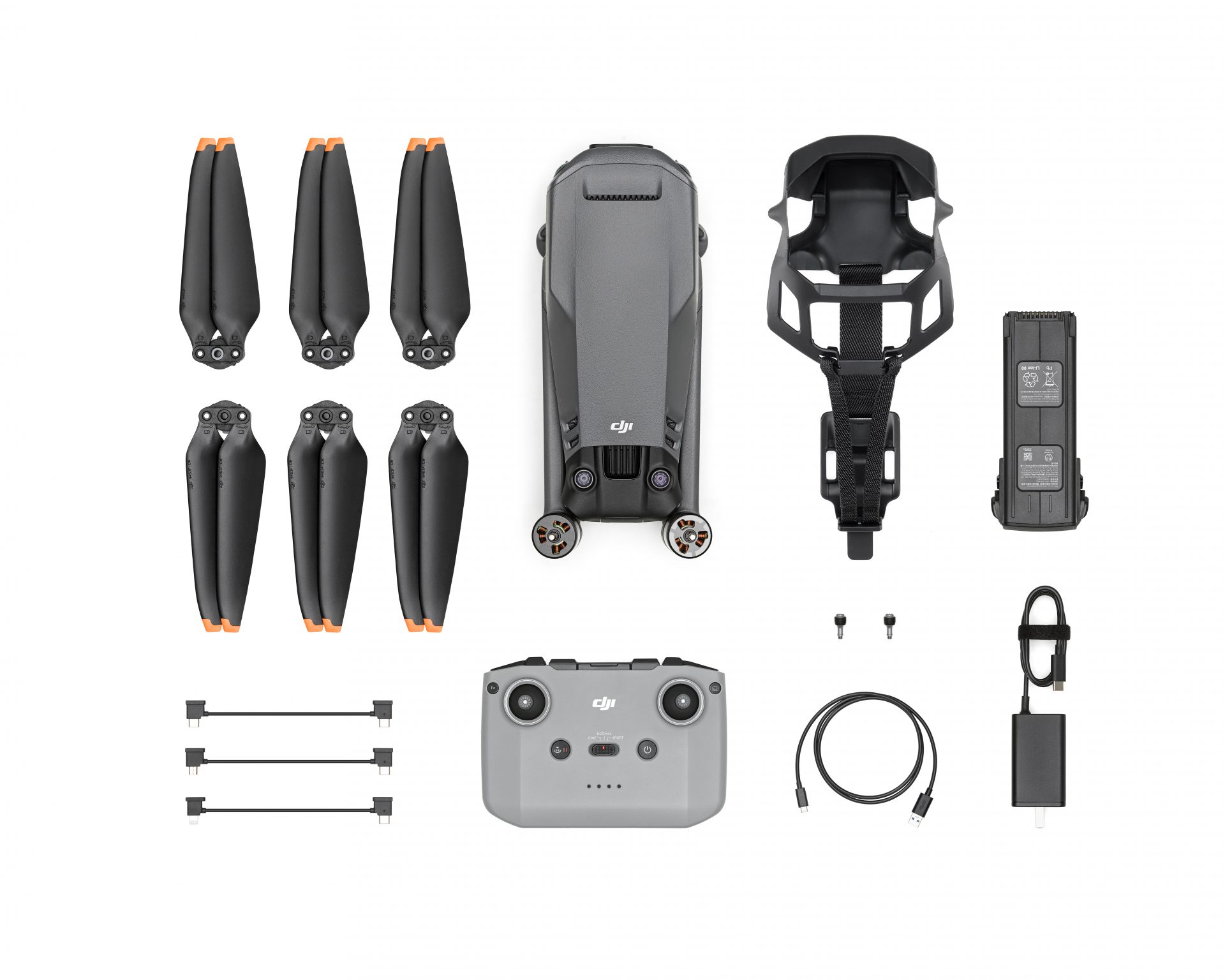 Where to get a Mavic 3 Classic – and for how much

DJI’s new aerial photography gem is now available at the company’s sales page, store.dji.com, or through authorized retailers. The drone will be sold in three packages: