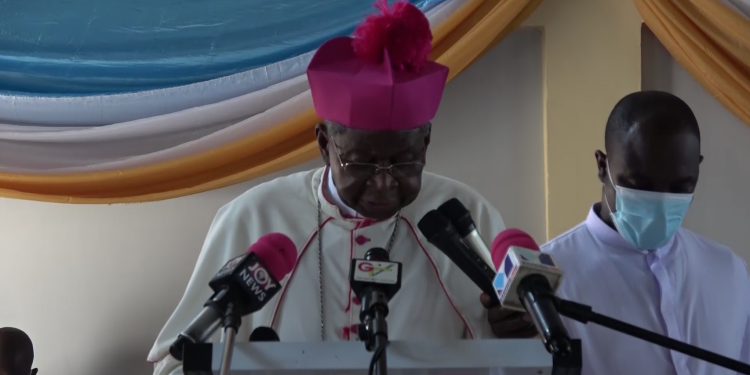 The President of the Catholic Bishops Conference, Most Rev. Philip Naameh, has taken a swipe at the government and the various security agencies over alleged widespread nepotism and corruption in the country, especially during the recruitment processes of the agencies.

According to Most Rev. Philip Naameh, who doubles as the Metropolitan Archbishop of Tamale, the various security agencies are now replete with nepotistic and corrupt tendencies to the extent that
many qualified Ghanaians can no longer be recruited on their merit without relying on the benevolence of those in power.

Most Rev. Philip Naameh, speaking during their week-long plenary assembly which is ongoing in Wa narrated how he heard a “big politician” instructing someone to remove the names of some persons perceived to be members of the opposition NDC from a recruitment list.

According to him, the said “big politician“ picked a call he (the bishop) placed to him without knowing, and in the process, he heard him (the big politician) giving the instructions.

“For many people today, politics is a distasteful one, often due to the mistakes, corruption, and inefficiencies of some politicians. About six days ago, in the wake of this recruitment into the security forces, many people came to my office asking me to connect them to political big men because they have heard that unless you know somebody in government there is no chance for them even if they have filled the forms correctly, they have passed through the body checks and all of that. So in my naivety, I also called a Minister of state who I thought was a good Catholic, and he might have pressed his phone bottom without looking at who was calling. And then he started giving instructions to some of his people in the office. Take out these people from the list, they are NDC”.

He said he was “utterly shocked by the development and warned that such tendencies could disintegrate the moral fiber of the Ghanaian society.“

He admonished the NPP-led government to look beyond their party faithful in the running of the country.

“Our President and even the ministers were elected by all Ghanaians to move development in Ghana forward. They were not elected to be committed to only the card-bearing members of their party”.