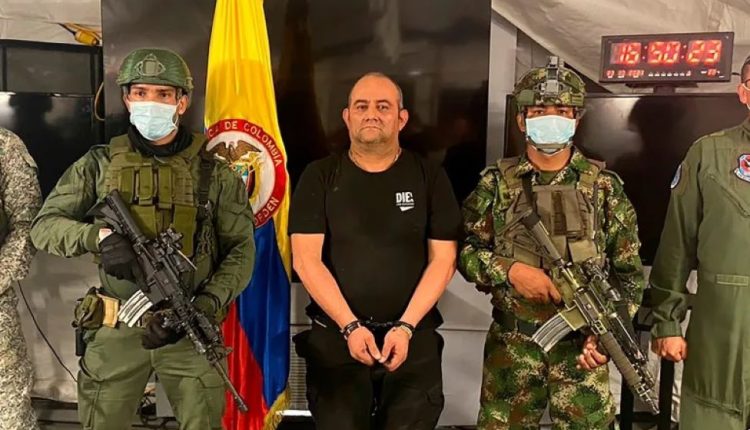 Dairo Antonio Usuga, alias 'Otoniel', the leader of the Gulf Clan, poses for a photo while escorted by Colombian military soldiers [Handout via Reuters]
News

Better known as Otoniel, the leader of the Autodefensas Gaitanistas de Colombia or the Gulf Clan, was captured on Saturday in a rural area in the Uraba region.

President Ivan Duque hailed Otoniel’s capture as a victory, likening it to the arrest three decades ago of the notorious Colombian drug kingpin, Pablo Escobar.

“This is the biggest blow against drug trafficking in our country this century,” Duque said during a news conference. “This hit is only comparable to the fall of Pablo Escobar in the 1990s.”

The Colombian president said his government was working on extraditing Otoniel, most likely to the United States, where he was first indicted in 2009 in a Manhattan federal court on drug trafficking charges.

The 50-year-old also faces criminal charges in Brooklyn and Miami in the US on charges of “operating continuing criminal enterprises, participating in international cocaine trafficking conspiracies and using firearms in furtherance of drug trafficking crimes”.

Jose Miguel Vivanco, Americas director of Human Rights Watch (HRW), congratulated the Colombian government on Otoniel’s capture, tweeting that the drug lord “must be held accountable for the hundreds of crimes committed under his command”.

Authorities have been after Otoniel for years, killing allies, capturing family members and going after his finances. Colombia had offered a reward of up to $800,000 for information leading to his capture, while the US had put a bounty of $5m on his head.

Duque said Otoniel’s arrest “marks the end of the Gulf Clan”, but analysts and human rights group worry the move could result in more violence at a time of worsening clashes between armed groups.

“When the head of an organisation, a ‘kingpin’, is toppled, there are a dozen underlings ready to take their place. And I have no doubt the same will happen with Otoniel,” said Sergio Guzman, director of Colombia Risk Analysis.

Still, the takedown of Otoniel was a success, Guzman said, as it comes at a time when the Colombian security forces are slowly losing control of rural areas to armed gangs.

The US and the United Kingdom provided the intelligence in the operation to capture Otoniel, according to The Associated Press news agency, while more than 500 members of Colombia’s special forces and 22 helicopters were used in the jungle raid.

Experts say Otoniel’s capture falls in line with a military tactic used in Latin America, known as the “kingpin strategy”, in which security forces seek to take out the leader of an armed group in order to topple its criminal enterprises.

The strategy was used in the killing in 1993 of Escobar, who at the time was the leader of the Colombian Medellin cartel, as well as the capture in 2016 of Joaquin “El Chapo” Guzman, the former leader of the Mexican Sinaloa cartel.

But the tactic has long been criticised by experts, who say it often has the opposite of the intended effect, creating in-fighting within armed groups and new struggles for territorial power, and in turn generating more violence. They say this was the case following the capture of Guzman and the killing of Escobar.

A Colombian human rights defender who has received death threats from the Gulf Clan over her work advocating for victims of conflict said she is worried Otoniel’s arrest could worsen violence in her home region, Los Montes de Maria.

The sweltering northern area – which saw a brief respite in violence when the Revolutionary Armed Forces of Colombia (FARC) group signed a peace pact with the Colombian government in 2016 – is a strategic drug route and an historic hub for armed groups.

“The Gulf Clan in the Montes de Maria gets stronger every day,” said the human rights defender, who wished to remain anonymous. “Every day, their forces grow.