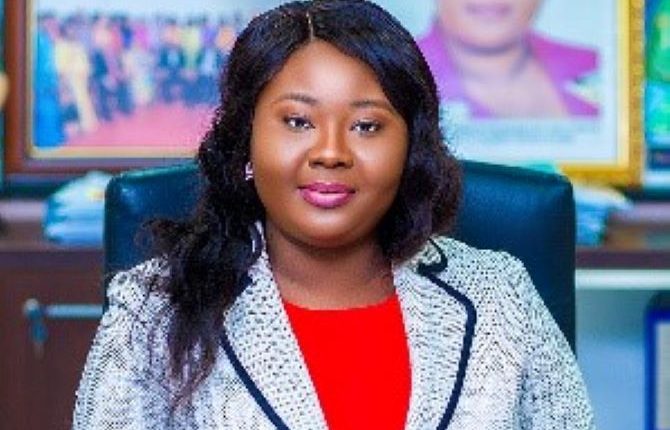 The Commission on Human Rights and Administrative Justice (CHRAJ) is investigating allegations of conflict of interest against the Deputy Gender Minister-designate, Francisca Oteng-Mensah.

The Kwabre East MP is accused of using her influence as the Board Chairperson of the National Youth Authority (NYA) to lead the board in approving the procurement of sanitisers from a company in which she is a director and shareholder.

Documents from the Registrar General’s Department show that Adonko Bitters Limited has nine directors, including the lawmaker and her father, Kwaku Oteng.

Ms Oteng-Mensah is alleged to have supervised the board to pay ¢700,000 to Adonko Company – a subsidiary of the Angel Group of Companies.

A resident of Nima in Accra, Ismail Mohammed, on January 21, 2021, therefore, petitioned the anti-graft institution to look into the conduct of the MP, insisting the NYA’s ¢3 million expenses on a Covid-19 campaign in 2020   had elements of impropriety.

The NYA board’s approval of the expenditure on March 31, 2020, came at a time the country had recorded more than 150 cases of COVID-19 and was girding its loins to confront the pandemic.

Fourteen out of the 15 board members of the institution were in the Zoom meeting to approve the amount. That meeting had the board chairperson, Francisca Oteng Mensah; the CEO, Sylvester Tetteh; and a Deputy Executive Director of the National Service Secretariat, Henry Nana Boakye, in attendance.

Minutes of the board’s virtual meeting on that day show the CEO presented management’s proposal for GH₵3 million for a campaign to support the government’s fight against COVID-19.

This paved the way for the Board Chairperson to call for a voice vote on the matter.

“Majority of the members voted for the approval of ¢3 million for management to undertake various activities towards the fight against Covid-19, with no indication of dissension,” the minutes said.

However, a member of the board, Emmanuel Yao Dormenya, asked for more than approval. He suggested that “management should submit [a] budget to the finance committee for scrutiny.”

Ms Oteng-Mensah shot the idea down.

“The Chairman in view of the exigency of the request directed the CEO to present regular updates on the activities on the board’s page and a comprehensive report to the board on the outcomes of the lined-up activities under the programme during the subsequent meeting,” the board minutes indicated.

The petitioner alleged that by superintending the meeting to approve the Covid-19 campaign, Ms Oteng-Mensah had violated Article 284 of the 1992 Constitution and Section 7 of the NYA Act.

Both laws require that public office holders declare their interest in matters that are before them for consideration.

The constitution says: “A public officer shall not put himself in a position where his personal interest conflicts or is likely to conflict with the performance of the functions of his office.”

The NYA is no different. Its law states:

(2) A member ceases to be a member of the Board if that member has an interest in a matter before the Board and (a) fails to disclose that interest; or (b) participates in the deliberations of the matter.”

With these laws in mind, the petitioner said Ms Oteng-Mensah rather “participated, deliberated and presided over this particular matter and subsequently failed to disclose her interest in the matter.”

On March 31, 2020, the NYA issued a statement launching a nationwide youth campaign against the Covid-19 pandemic.

The authority mentioned that it would “restrict the campaign to electronic means, thus social media, traditional media and text messages. Short and informative videos and messages will be created and broadcasted on the various social media platforms, radio and television stations.”

The lawyers for the MP say the mere fact that the NYAboard chair was linked to Adonko Bitters, where the NYA bought hand sanitisers, did not put her in a conflict of interest situation.

The NYA board chair, according to her lawyers, “never ‘participated’, ‘deliberated’ and ‘presided’ over the purchase of hand sanitisers from Adonko Bitters Limited as alleged by the petitioner”.

An invoice from Adonko Bitters Limited, payment vouchers and a cheque from the NYA attached to the response to CHRAJ, according to Francisca’s lawyers, indicating that the purchase of and payment for the hand sanitisers preceded the March 31, 2020 meeting cited by the petitioner as having discussed the Covid-19 expenditure.

The attached documents show that the invoice from Adonko Bitters and the Bank of Ghana cheque for payment is dated March 29, 2020.

The cheque payment voucher from the NYA to the Bank of Ghana is, however, dated March 27, 2020, two days before the invoice was received.

The lawyers said the amount was within the Public Procurement Authority’s threshold that the CEO of the NYA could approve without seeking the board’s approval, a reason the board was not involved in the deal.

They told CHRAJ that the petitioner did not produce any evidence that links the board chair to the transaction.

The Member of Parliament for Essikado-Ketan and Senior Partner at Ghartey and Ghartey, Joe Ghartey, told The Fourth Estate that CHRAJ’s investigation into the allegation had been unduly delayed.

He said this was a straightforward matter and that his client had provided all the necessary documents and evidence to enable CHRAJ to arrive at a conclusion.

He says this was not a case that should travel over a year.

He strongly believes the MP and board chair is innocent and that the delay amounts to justice being denied her.

On the deputy ministerial nomination of Francisca Oteng-Mensah, Joe Ghartey, who is a former minister of Justice and Attorney-General, believes the current probe by CHRAJ should not impede her appointment.

He says the law only bars persons that have been found guilty by commissions of enquiry and not the mere fact that an allegation has been levelled against someone and that allegation is being investigated.

According to him if allegations and investigations are used to stop people from holding office, anybody could be paid to make allegations against a person nominated to serve a public office in order to stop them. He says Francisca Oteng-Mensah is innocent and wants CHRAJ to expedite its investigation and come out with a conclusion.

However, CHRAJ has confirmed to The Fourth Estate that it has almost completed investigations into the matter.

According to CHRAJ’s Guideline on Conflict of Interest (COI), ‘when the promotion of the private interest of a public official result or is intended to result in or appears to be or the potential to result in an interference with the objective exercise of the person’s duty and an improper benefit or an advantage by virtue of his/her position, then it constitutes a COI.”

CHRAJ defines “a Public Officer as a person nominated, elected or appointed to serve in a public office.”

In recent times, the commission has found a number of public office holders guilty of conflict of interest and recommended various sanctions against them.

The most notable one is the dismissed Public Procurement Authority (PPA) CEO, A.B. Adjei, who was found guilty of Conflict of interest and banned from holding public office for 10 years.

Mr Adjei was investigated by CHRAJ for corruption and conflict of interest after he was accused of using his office for personal gain.

He was caught in an investigative report of The Fourth Estate’s Editor-in-Chief Manasseh Awuni Azure in 2019, which revealed that a company owned by Mr Adjei was winning government contracts and selling them to prospective buyers.