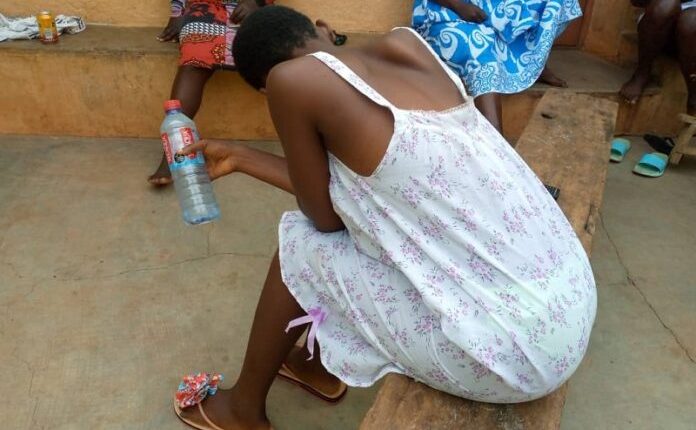 A 45-year-old chainsaw operator, Albert Quansah is reported to have defiled and impregnated his 15 years old daughter who is deaf and dumb at Twifu Nkohunuho in the Twifu Atti-Morkwa District of the Central Region.

The mother of the victim, Madam Norah Abagah popularly known as Fatima, explained to EIB Network Central Regional Correspondent Yaw Boagyan that the entire family traveled to Twifo Kayireku to observe a one-week celebration of their father in law who recently passed away.

She further explained that she later noticed some physical and behavioral changes in her 15-year-old daughter. So She began interrogating her daughter during which the latter revealed that her father forced and had sex with her during the one-week celebration of her grandfather.

The suspect was said to have invited his daughter to his room, pushed her onto the bed, and forcibly had sex with the young girl who could not scream for help as she’s dumb.

The victim, unfortunately, could not inform anyone of her predicament until she was found pregnant. Investigation revealed that this was not the first time Albert Quansah had had sex with her deaf and dumb daughter.

The matter has been reported to the Twifo Praso Police but the suspect following the disgraceful act has fled from the town out of shame.

Meanwhile, the mother of the victim has appealed to the police to seek justice for the victim and has vowed to divorce her husband as she cannot keep on marrying a man who has shamefully impregnated his own daughter.

Mason jailed for breaking into Supermarket at Oyarfia