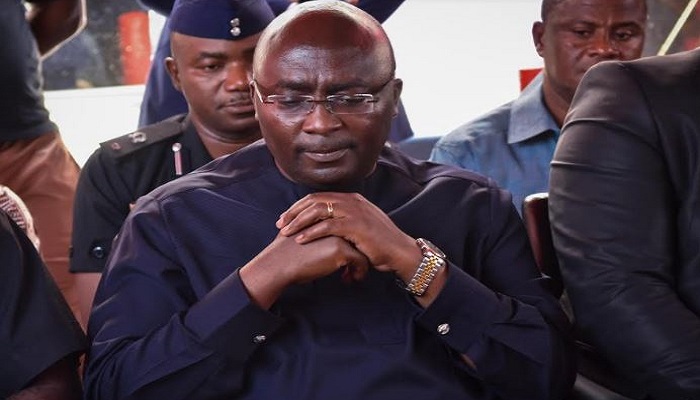 A spokesperson for former President Mahama, Felix Kwakye Ofosu, has criticised the Vice President’s comparison of Ghana Cards and roads.

According to him, the comparison by Dr Mahamudu Bawumia is ‘abject nonsense’.

In a Facebook post on Friday, he explained that, even though a country’s development is hinged on a multiplicity of factors, it is untenable for the Vice President to elevate the Ghana Card over road interchanges.

This he said constitutes cheap propaganda on the part of Ghana’s Veep.

“Bawumia’s comparison between Ghana Cards and roads (interchanges) is abject nonsense and no one should patronize Ghanaians with claims that we do not understand what he said.

He gets carried away with ridiculous sloganeering and cheap propaganda and ends up diluting the import of even legitimate points that should otherwise earn him plaudits”, Mr Kwakye Ofosu wrote.

The former NDC appointee continued, “No single item ensures the development of a country. Several things come together to ensure that.

Infrastructure is just as important as anything else and cannot be downplayed in a bid to exalt ICT uptake as the single most important thing in the history of this country.

This morning, people are not eating Ghana cards. The folks who work at the NIA that issues the cards didn’t drive on cards to work this morning. They drove on roads”.

In conclusion, he also added that, “Bawumia himself is driven in his fleet of Mercedes Benzes provided by the state on roads to work and back, not on Ghana cards. In any event, how has the Ghana card prevented us from slumping into the worst economic situation in the last 30 years?”. 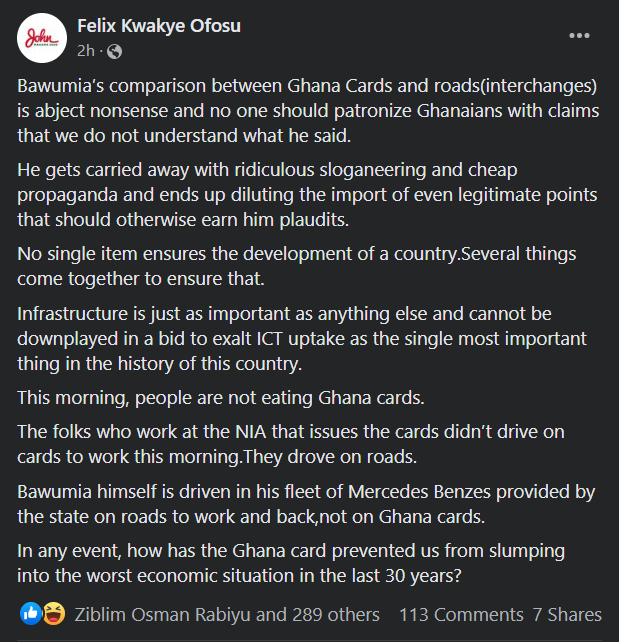 Mr Kwakye Ofosu’s comments were in reaction to Dr. Bawumia’s earlier assertion that he will prefer the Ghana card over road interchanges in the country’s quest for development.

Speaking at the Accra Business School on Thursday, the Chairman of the Economic Management Team, said the national identity card, also known as Ghana Card, is more beneficial than the numerous interchanges constructed across the country.

“We have implemented a national identification system and today we have 16 million Ghanaians with unique identities and that is a major transformation. And sometimes a lot of people don’t even appreciate what the impact of the Ghana Card is.

But if you gave me 1,000 interchanges and a Ghana Card, I will choose the Ghana Card because it is more impactful”, he said.

Dr Bawumia also added that Ghana’s return to the IMF can be blamed partly, on the lapses of the erstwhile NDC administration.

But an economist at the University of Ghana Business School (UGBS), Prof Lord Mensah, says it is not necessary for the Vice President to blame the erstwhile Mahama administration for the country’s economic woes.

According to him, he does not see the need for Dr Mahamudu Bawumia to travel back into the years and accuse past regimes for the difficulties confronting the citizens.

Speaking in an interview with Kojo Yankson on the Super Morning Show on Friday, Prof Mensah explained that when a new government assumes power, it automatically inherits the assets and liabilities of its predecessor.

In this regard, he stated that good economic managers are expected to convert the liabilities they inherit to profits, and therefore, Dr Bawumia must stop making reference to the faults of the NDC.

“As an economic manager, you should know that before you take over, you’re coming to inherit liabilities and assets. You cannot just parade only the liabilities and indicate that this is what you inherited and therefore without it, you could have been better. What about the resources that you had? What did you use them for?”, Professor Lord Mensah quizzed.

He continued: “There’s a reason why we have four years political cycle. So if within the four years, you cannot turn around things. I don’t think it is necessary to go back in years. I don’t think Ghanaians will be better off with these kind of references and statements coming from our economic managers”.

“So the reference to those two things are not necessary anyway. Not at this time. We’ve gone far. I mean we are far deeper into the years. [After] six years of handling the economy, I don’t think we need to make reference to this”, he added.

Meanwhile, Dr Bawumia has been trending on Twitter after he declared his choice of the Ghana Card over road interchanges.

Prices of petrol, diesel, LPG to go down from July 16