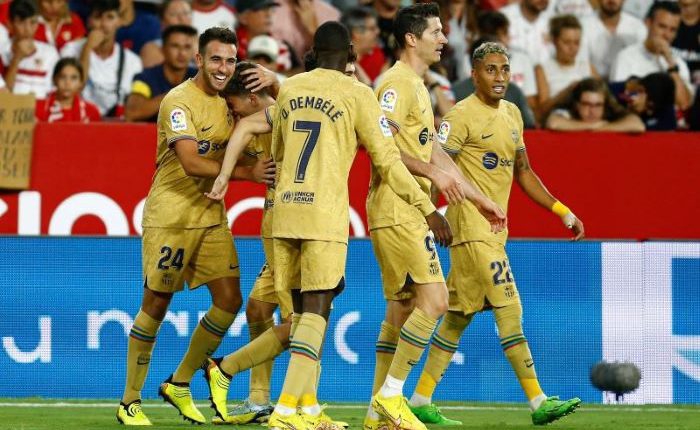 Barca beat Sevilla to maintain unbeaten start to the season

Barcelona moved up to second in La Liga after maintaining their unbeaten start to the season with victory at Sevilla.

Raphinha was in the right place to head home his first Barcelona goal following his £60m summer move from Leeds.

The visitors doubled their lead before half-time when Robert Lewandowski took the ball on his chest and volleyed in for his fifth goal of the campaign.

Sevilla’s wretched run against Barca continued, now winning just one of their last 31 league games against their opponents, a run which stretches back to the 2007-08 season.

The home supporters expressed their dissatisfaction at full-time with loud jeers as their side have just one point from their opening four league games.

Former Leeds winger Raphinha set Barca on their way with an opportunistic header after Lewandowski’s dinked effort was cleared off the line.

The Brazil international almost scored a quickfire second but his curling strike drifted narrowly over.

Fellow summer signing Jules Kounde, playing against his old club after a £42m move, could have scored in the first half, but mistimed his header from six yards out.

But the France international did provide the assist for the next two goals – a superb, raking pass finished off by Lewandowski while centre-back Garcia headed in from Kounde’s nod back.

Barca are two points behind champions Real Madrid, who kept up their 100% winning start with a 2-1 victory over Real Betis.

Xavi’s men are back in action on Wednesday, when they begin their Champions League campaign against Viktoria Plzen.

Sevilla, meanwhile, were made to pay for their missed chances as Ivan Rakitic’s effort was cleared off the line by Ronald Araujo and Youssef En-Nesyri’s low shot tipped was wide by Marc-Andre ter Stegen.