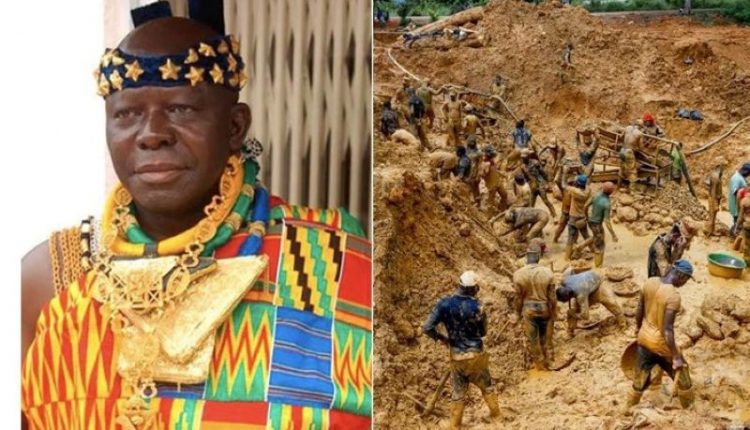 Asantehene scolds his chiefs for failing to report galamsey destruction

The Asantehene, Otumfuo Osei Tutu II is questioning the neutrality of his chiefs in illegal mining activities.

He questioned why the chiefs under his authority have been silent and failed to voice their complaints about the environmental damage done by illegal miners, particularly to water bodies in their areas.

Have you ever informed me that your water bodies are being destroyed and your people can’t get water to drink? He quizzed when he addressed the Ashanti Regional House of Chiefs in Kumasi on Friday.

The Asantehene’s comments followed an appeal to chiefs by the Administrator of Stool Lands to help stop activities of illegal mining which have wreaked havoc on farmlands and led to the destruction of cocoa farms.

Maame Ama Edumadze Acquah observed that the chiefs risk a decline of their share in the payment of revenue from stool lands since several cocoa farms have been destroyed by illegal mining activities.

Infuriated by the observation, the Asantehene wondered how chiefs who have sworn allegiance to protect lands on his behalf have kept mute over the operations of illegal miners.

Are you not aware that people are using excavators to mine and destroy the environment, and that the government is struggling with the fight?  You’ve sworn an oath of allegiance to be custodian of Essumenja, Asokore, as Asokorehene to be my representative.  When you pass by galamsey sites with your cars and flags hoisted on them, don’t you see the destruction? Otumfuo quipped.

The government has struggled with the fight against illegal mining.

The introduction of military-led interventions such as Operation Vanguard, Galamstop, Operation Halt, has yet to help stem the tide.

The destruction means millions of Ghanaians have been denied their livelihoods.

According to the Asantehene, though the chiefs have no arms to fight the illegality, they could have taken advantage of laid down traditional structures such as the Regional House of Chiefs or the Asanteman Council to drum home the galamsey issues.

It is true you have no arms but what did you do? We have our laid down structures here. You could complain here or when we meet at the Asanteman Traditional Council.

You have kept mute because the miners have been home and given you money. I hear your share of gold is sent to you at home. What about that? he quizzed.

This was the first General Meeting of the Ashanti Regional House of Chiefs chaired by the Asantehene, Otumfuo Osei Tutu II in 2022.

According to him, the silence of the traditional leaders could mean one thing only; they are benefiting from galamsey operations.