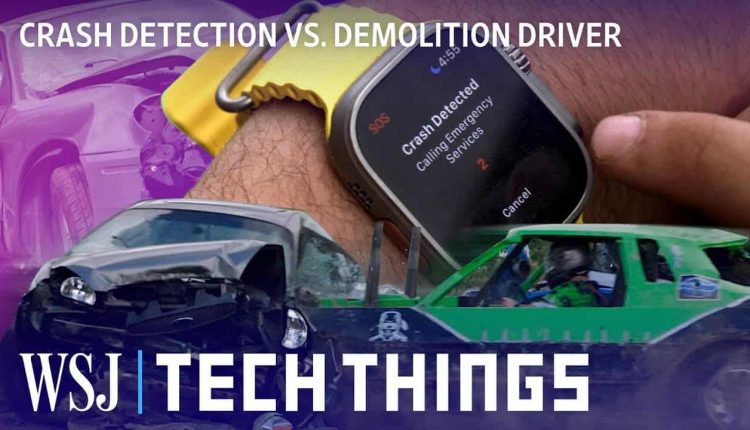 The current iPhone and Apple Watch models that support the “car crash detection” function include:

As a new feature, users have expressed concerns about the usefulness of “crash detection”. So The Wall Street Journal teamed up with a Michigan YouTuber to test if they could get the new iPhone to trigger the safety feature.

They put an iPhone 14, a Google Pixel in a derby car, an Apple Watch Ultra strapped to the driver’s wrist, then another iPhone 14 Pro Max and a Google Pixel 6 in a garbage truck that was about to be crashed into. The test will simulate a crash by crashing a Derby car (driven by a professional Derby driver) against a parked scrap car. This test is to see which of the devices successfully triggers the crash detection feature

The test result reveals that the Apple Watch on the driver successfully detects crashes. However, the iPhone 14 Pro Max completely fails to detect any impact. In the driver’s car, the Google Pixel smartphone did detect one crash. However, neither the iPhone nor the Pixel device in the garbage truck detected crashes.

An Apple spokesman said the test conditions did not meet the iPhone’s minimum requirements to trigger the feature. The company claims that the sensor probably did not receive enough signal to trigger the feature. It claims that there was no connection to Bluetooth or CarPlay, which would indicate the car was in use. Another excuse Apple gave is that the vehicle probably didn’t travel far enough before the crash to prove it was driving. Apple claims that if the iPhone received these additional indications, and its GPS showed the car was on a real road, the alert would be more likely.

Of course, neither Google nor Apple car detection features can guarantee 100% detection of all types of car crashes/collisions. Apple even includes a disclaimer under the “Crash Detection” setting on the new iPhones.

Apple’s official website notes: The car crash detection feature is designed to detect “serious” car crashes, such as those involving “sedans, minivans, SUVs, pickup trucks and other passenger vehicles”. The company warns that the feature “cannot detect all crashes,” so it’s not foolproof.

Apple says its crash detection features rely on “advanced motion algorithms designed by Apple, trained on over a million hours of real-world driving and crash-recorded data”. The car crash detection feature utilizes sensors such as accelerometers and gyroscopes on a supported iPhone or Apple Watch. If you are in a car crash and unresponsive, this feature will automatically contact emergency services.

When a severe car crash is detected, the feature will interact with your Apple Watch if you are wearing one. If you do not have an Apple Watch but own any of the compatible iPhones, it will interact with your iPhone. Then, an alert will appear on your device screen for ten seconds. If you are still responsive after the crash, with a single tap, you can call emergency services immediately. However, if you do not need to contact emergency services, you can with a slide, dismiss the alert. Nevertheless, if you remain unresponsive and didn’t make any choice after 10 seconds, the device will commence a 10 seconds count down. After the countdown ends, emergency services will be automatically contacted. This means that after a crash is detected, the automatic emergency call is sent out after 20 seconds. After the call is sent out, an audio message will play on a loop with five seconds of silence. The audio message will say “the owner of this iPhone was in a car crash and is not responding to the phone”. It will also relay your estimated location with latitude and longitude as well as with search radius. This information will be sent to emergency services. The information will also play through the device speaker. After the first message plays, subsequent loop messages will have lower volumes. This will allow you to speak to emergency services if you need to. This message will continue to repeat until you tap the screen or the call ends.