Finally, the long wait is over for those who were waiting to change their iPad devices. As promised, Apple announced the latest edition of the iPad Pro on the 18th October 2022. Apple did not hold any launch event for this product. They launched it via a press release on the Apple newsroom website. The presentation videos were also made available on YouTube.

The iPad Pro was not the only device that Apple has released today. Together with the iPad Pro, the company also launched the new Apple TV box. The new TV box comes with a smaller measurement than the previous edition. It also weighs 50% lighter than its predecessor.

Apple has also launched a new entry level iPad. The iPad 10th Gen is the new entry-level iPad with a lot of attractive colors and features. It features a 10.9-inch Liquid Retina display. It came in four beautiful colors; White, Blue, Red and Yellow. Apple has redesigned the new iPad to a more modern design and moved the front camera from the screen into the landscape top bezel. The iPad 10 uses Apple’s own Bionic A14 chip and a side-mounted Touch ID. To make unlocking your device even more easier, the Touch ID is embedded in the power button. It also features 12MP ultrawide front facing and 12 MP back cameras. Apple also launched the iPad with Magic Keyboard Folio. This new keyboard uses magnetic energy to attach to the bottom of the iPad. It does not require charging like others, so it draws its power source from the iPad. In terms of network connectivity, you have two types to choose from. The WiFi only and the cellular with 5G connectivity. The iPad 10th Gen is selling for just $449.

The iPad Pro Features And More

There is so many to talk about when it comes to the 2022 iPad Pro. It comes with a lot of great new features and also lacks two very important technologies. We will talk about all the good and bad with the new iPad Pro. Like I already stated, there is a lot of goodies to talk about when it comes to the 2022 iPad Pro. The new iPad Pro is in a league of its own. It packs enough features to satisfy everybody, no matter what you do. Let’s talk about it right away.

The M2 Chip: This is the main talking point of the new iPad Pro 2022. According to Apple, the latest M2 chip has 8- core CPU that will give you up to 15% faster CPU performance than the M1. It also features 10-core GPU which is enough to give you 35% faster Graphics performance as well. When it comes to handling of Machine Learning tasks, the new M2 chip does it far better than its predecessor. 40% faster Neural Engine and 50% Memory Bandwidth gives it plenty of power to handle all machine learning tasks.

What this means is that the new M2 chip gives the iPad Pro extra capabilities to handle tasks such as complex architectural and realistic designs, photo-realistic 3D images and editing of large commercial image files. Playing games just got better on the IPad Pro as well. The high frame rate of the M2 chip is capable of producing a console-like experience in gaming. And guess what, you can perform all these tasks throughout the day without having to worry about battery life too.

ProRes video encoding and decoding on the iPad Pro also gives you an edge above the rest. The M1 chip really handled conversion of ProRes videos faster but the M2 chip will do it 3x faster.

There is no need to capture your videos with your iPhone or another camera before importing them to the iPad for editing. With the advanced image processing signal and the highly advanced cameras on the iPad Pro, you can capture high quality ProRes videos and edit it right there on the iPad Pro. You don’t need to use external microphone for recording videos too. The iPad Pro 2022 is equipped with 5 studio-quality microphones to give you clear voice when recording. It also carries four internal speakers with support for Dolby Atmos to give you sound quality which is on par with theater quality.

The Display: The iPad Pro 2022 rocks the Liquid Retina XDR display. It has a contrast ratio of 1,000,000:1. This high contrast ratio is more than enough to make you enjoy movies and your favorite TV shows at the highest LCD quality.

You are getting a 1,000 nits (600 nits for the 11-inch model) display brightness with 1,600 nits of peaks brightness too. So, no matter how much light you have around you, you don’t have to worry about having a clear view of your display.

Not just that, you also get to enjoy advance display technologies such P3 wider color, True Tone and ProMotion for a smoother working experience.

Cameras : Starting from the front facing camera. The iPad Pro has 12 Megapixels front facing camera. Which features 122 degrees wide-angle view. The front camera is placed within the bezel at a landscape location. It also works with the True Depth mode to unlock the iPad using FaceID.

One of the most eye-catching features of the front camera is what Apple calls the Center Stage Mode. With this new feature, you don’t have adjust yourself to the center of the screen when using the front camera anymore. So if you are recording a video, having an online presentation or having FaceTime calls. The Center Stage feature will automatically place you in the center of the screen On the flip side, the iPad Pro 2022 features a dual camera. You have 12 Megapixels wide angle main camera and a 10 Megapixels ultrawide camera. It also features the Lidar scanner which helps you focus quickly on the main subject. Whether you are capturing an image or shooting a video. You can place more emphasis on the main subject.

Instead of bringing out a whole new Apple Pencil, they rather brought some significant upgrades to the Apple Pencil 2nd Generation. Using your old 2nd Gen Apple Pencil with the new iPad Pro will make you think you are actually using a new 3rd Gen Pencil.

There is a new hover effect that does more than just hovering. Making unnecessary mistakes is finally gone for food. You will see the exact point your Apple Pencil will touch on your screen. Even before you touch the screen surface.

Pointing your Apple Pencil or hovering over apps and widget also expands the apps and widgets. This gives you a glimpse of the App even before you open it. The Apple Pencil 2, the M2 chip together with the iPadOS 16. These 3 make dragging images from one app to another app more easier than using your fingertips.

In terms of specifications and features, Apple has done an excellent job with the iPad Pro 2022. So much features, so much capabilities and so much specs. But I just don’t know why Apple always decides to leave something behind when we need it the most. Could it be that they do that to keep the prices low? Or they just do that so we can talk about it to raise the appetite of consumers the more. So that when they finally bring that feature everyone will rush for it?

Well, this is Apple, they always do things quite differently. You may complain but you will still find yourself using the same product you complained about. The iPad Pro lacks two features everyone expected. Now, after going through all the specs, I remained frozen for a moment. I just couldn’t believe this massive disappointment. I mean, this is 2022! We can forgive them for using an LCD Display for the entry level iPad 10. But who still uses LCD displays for a Pro device by this time? Only Apple and a few others. Both Samsung and Huawei have already started using OLED displays for some years now. I mean if anyone would still be using an LCD for a Pro device in 2022, it definitely should not be a company like Apple.

Difference Between LCD And OLED Displays

Don’t get me wrong, the Liquid Retina Display looks stunning with accurate colors and good brightness. But no matter how great the colors are, a black or dark scene will always expose the flaws of an LCD screen.

An LCD screen displays dark scenes by dimming the light to its lowest possible dimming level. So no matter how good all others colors may look, black colors just cannot look so great on an LCD screen.

On the other hand, an OLED display presents dark scenes or black colors by completely turning off the lights in that area. This always gives the best black colors on an OLED screens. And this is what makes OLED screens more expensive. 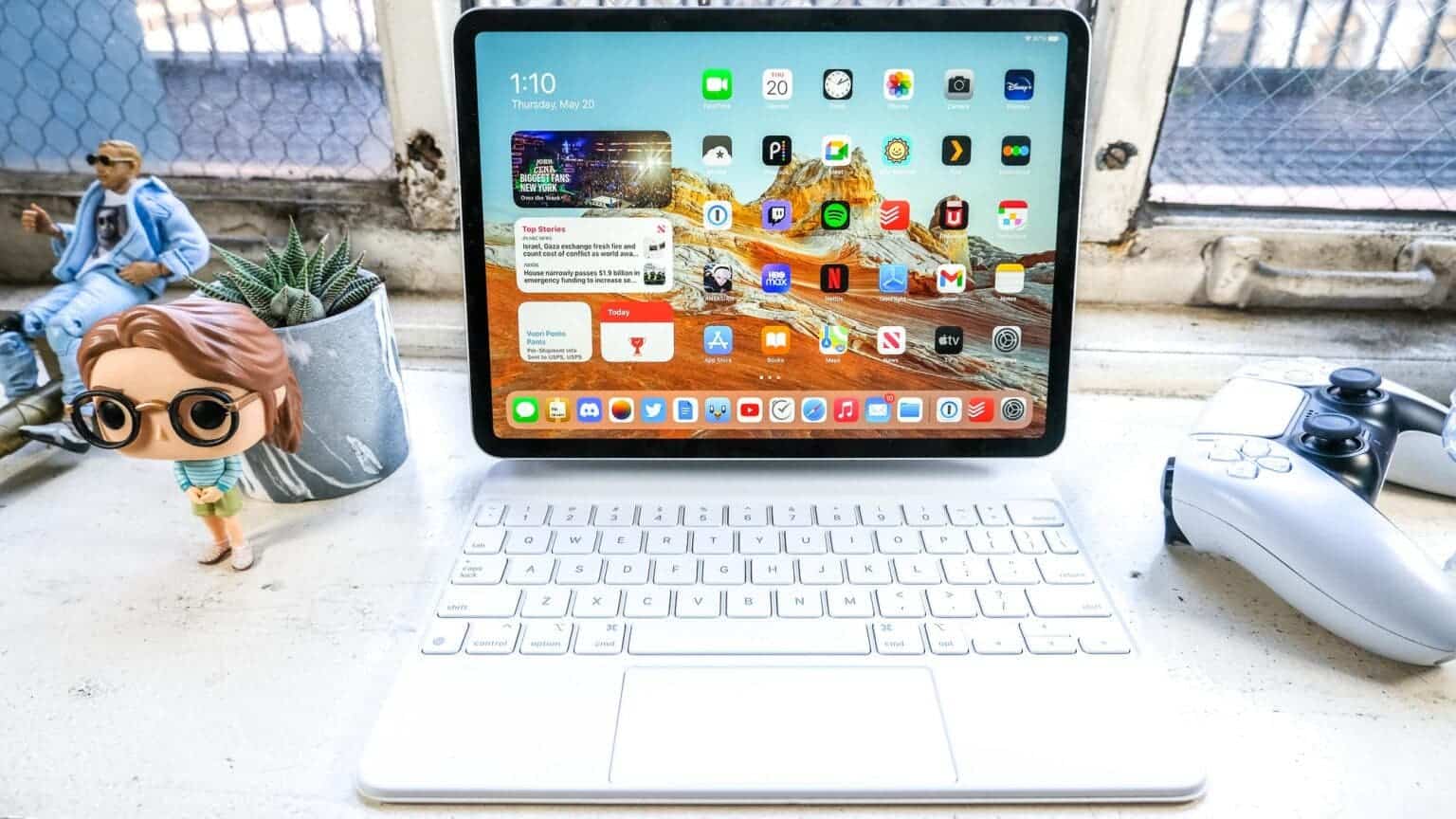 If you ask me whether to buy the iPad Pro or not, I would say you should go get it. Apart from the LCD Display, the iPad Pro surely carries enough power to handle all your complex projects. And besides, it has a good price too.