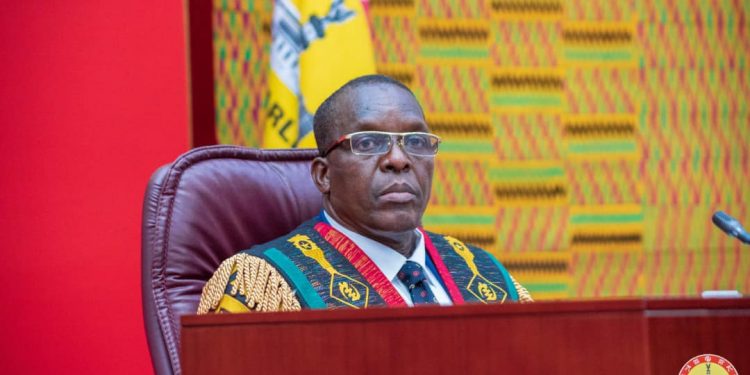 The Attorney General (AG) has revealed while reacting to a claim of witch-hunting made by Member of Parliament for Ajumako-Enyan-Esiam Constituency Casiel Ato Forson following the charges against him, that the current Speaker of Parliament Alban Bagbin is also being investigated for some of the actions he took in relation to the purchase of ambulances under the National Democratic Congress (NDC) administration when he served as Minister of Health.

The AG’s statement issued on Wednesday and signed by the Deputy Attorney-General, Diana Asonaba Dapaah, said all persons in Ghana are equal before the law.

The status of a Member of Parliament is no bar to prosecution for a crime committed, the statement further said.

“Same (investigations) had been ongoing since 2017 with a number of statements taken from various persons at different points in time, including the Rt. Hon. Alban Bagbin, former Minister for Health (now Speaker of the Parliament of Ghana), Mr. Kwaku Agyeman-Mensah, Madam Sherry Ayittey and Dr. Alex Segbefia, all former Ministers for Health as well as the first accused,” part of the statement read.

“Investigations into the ambulance purchase contract are being finalised by the Criminal Investigations Department of the Ghana Police Service for the commencement of criminal proceedings against persons deemed fit for prosecution.

“Further statements were taken from various persons. At that stage, no issue relating to the 2022 Budget and Economic Policy of the Government had come up,” the statement added.

“All persons in Ghana are equal before the law. The status of a Member of Parliament is no bar to prosecution for a crime committed,” according to the statement.

Mr Ato Forson had described the charges of willfully causing financial loss to the state, as frivolous and politically motivated.

Reacting the charges against him at a press conference in Accra on Friday December 24, he said “The investigation into the purchase of the ambulances, which is the basis for these frivolous charges, started in somewhere 2017.

“In November 2017, a request was made to the then Speaker of Parliament, the Rt. Hon. Aaron Mike Ocquaye, for me to assist the Economic and Organized Crimes Office (EOCO) with their investigation into this matter.

“I provided a statement to the EOCO detailing my honest recollection of the transaction. Interestingly, nothing was heard of the investigation until November 2021, a period of four years, when I started raising concerns about the 2022 Budget and Economic Policy of the Government. During this period, the Secretariat of the Rt. Honourable Speaker informed me that the EOCO had requested that I be released to assist with further investigation into the purchase of the ambulances. I was further informed that the Office of the Attorney General had requested that a charge statement be taken from me in preparation for formal charges to be filed against me.

“The coincidence speaks volumes about the motivation for these frivolous and baseless charges.

have signed a letter on behalf of the Minister of Finance, in my capacity as Deputy Finance Minister, for the establishment of

credit. If I may ask, ladies and gentlemen of the press, since when did ministerial instruction for the establishment of letters of credit become a crime in this dear country of ours?

“It is important to note that, whilst I am being prosecuted for my role in instructing that letters of credit be established for the

purchase of ambulances for use in our health delivery system, the Attorney General does not see it fit to prosecute those who left

the ambulances purchased with taxpayer money to rot while pregnant women are being carried on bicycles, aboboyaa, push

trucks and okada bikes to hospitals all over the country to deliver the next generation of Ghanaians.

“Between the person who requested that letters of credit be established for the purchase of ambulances and the person who took the decision to leave the purchased ambulances to deteriorate, who has caused financial loss to the state? Which of these two has misapplied state property?”Ato_Press_Release_Ambulances..Download

The Ranking Member of the Finance Committee of Parliament  together with two others, has been dragged to the High Court on five counts of willfully causing financial loss to the state.

According to the facts of the case, Dr Ato Forson, when he was a Deputy Finance Minister under the Mahama administration, executed a contract by the government of Ghana to purchase some 200 ambulances for the National Ambulance Service.

Despite the granting of a medium term loan facility of €15.8 million for the 200 ambulances, only 10 were shipped to Ghana in 2014.

“A post-delivery inspection of the first batch of 10 ambulances revealed that same were without any medical equipment in them.

“Other fundamental defects included defects on the body of the vehicles and the patient compartment of the ambulances,” the writ noted.

The two other accused are Sylvester Anemana, who was a Chief Director at the Ministry of Health, and Richard Jakpa, the Ghana representative of Dubai-based Big Sea General Trading Limited.

While Sylvester Anemana has been charged for abetment of crime namely wilfully causing financial loss to the state contrary to Sections 20(1) and 179A(3)(a) of the Criminal Offences Act, 1960 and breaching the Public Procurement Act, Richard Jakpa is on a charge of wilfully causing financial loss to the state “by intentionally causing vehicles purporting to be ambulances to be supplied tot he Republic of Ghana by Big Sea General Trading Ltd of Dubai without due cause”.

Mr Ato Forson, who is the first accused, has additionally been charged for intentionally misapplying public property contrary to section 1(2) of the Public Property Protection Act, 1977.

He is said to have misapplied €2.37 million by causing irrevocable Letters of Credit to be established against the budget of the Ministry of Health in favour of the Dubai-based firm.

The charges were brought against the three by the state.

Meanwhile, in May last year, Mr Bagbin was reported to have said that but for some interventions he put in place during his tenure as Health Minister, the National Ambulance Service would have grounded to a halt.

“I was Minister for Health and I personally distributed 161 new ambulances. At that time, we had only 33 in the whole country and so when you add 161, it went to 194. So it’s good to keep increasing but maintenance is an issue” Alban Bagbin revealed.

He called for a critical look at how to ensure regular maintenance of ambulances in the country.

His remark came on the heels of a comment made by MP for Adansi Asokwa, K.T. Hammond who contended that the Akufo-Addo government deserved praise for the purchase of some 307 ambulances to the fleet at the Ambulance Service.

VIDEO: ‘I Stopped Going To Church Because Pastors Tried To Sleep With Me’ – Actress Christiana Awuni