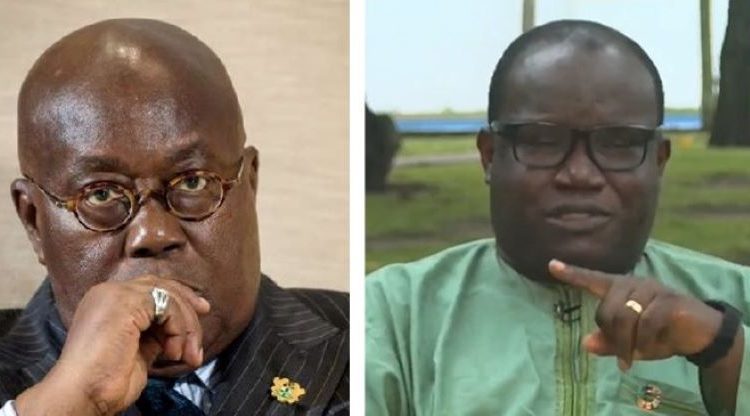 Akonta Mining saga: Akufo-Addo is a disappointment for not ordering Wontumi’s arrest – Ashigbey

The convener of the Media Coalition Against Galamsey, Mr Ken Ashigbey, has expressed his disappointment with President Nana Addo Dankwa Akufo-Addo for not ordering the arrest of the managers and CEO of Akonta Mining Limited for engaging in illegal mining in the Tano Nimiri Forest Reserve.

While addressing his MMDCEs in Kumasi on Wednesday, 5 October 2022 on the galamsey menace, the President said he had summoned the DCE for Bosome Freho in the Ashanti Region following a viral tape implicating him in illegal mining.

Mr Yaw Danso is alleged to have been involved in dodgy dealings and transactions linked to mining concessions within his jurisdiction.

But Mr Ashigbey said this move is not enough in the fight against galamsey when a big fish like the Ashanti regional Chairman of his party, NPP, who is the CEO of Akonta Mining Limited, has been confirmed to be involved in illegal mining in the Nimiri Forest by the Ministry of Lands and Natural Resources and the Minerals Commission is walking free.

Speaking on the Class Morning Show with Kofi Oppong Asamoah, Thursday, 6 October 2022, Mr Ashigbey said the owners and managers of Akonta Mining Limited must all be arrested and prosecuted.

He said: “The president missed a very big opportunity: You’ve a situation in which your minister of lands and natural resources, the man you’ve appointed to be in charge of this whole ministry, tells you that Akonta Mining Limited is mining illegally in the Nimiri forest, which is a sin against the Minerals and Mining Act, as amended and the Minerals Commission comes to confirm it that those documents that Akonta Mining shared to the media purporting that they have a permit do not give them a claim to have a lease to mine in the Nimiri forest and then the president points out to a DCE who has been summoned by the minister and then this person who has been pointed out as engaging in an illegality, who is the regional chairman of your party, who, you go into the office of the Registrar of Companies, is named as the shareholder, director and beneficiary owner… involved in the illegal mining within the Nimiri forest…I would have thought the president would be telling us at that point he has ordered the IGP to arrest everybody behind Akonta Mining and begin an investigation and be prosecution under the minerals and mining act as amended.”

“So, for me, that was my disappointment,” he added.

Meanwhile, in his address to the MMDCEs, Nana Akufo-Addo said he would not protect any of them if there is ample evidence against them sabotaging the national fight against galamsey.

Indeed, he added: “I want you to know that this is a struggle that I take very seriously and I will not be in a position to protect anybody against whom evidence is marshalled to show their complicity, I won’t do it.”

EOCO to go after businesses operating without permit