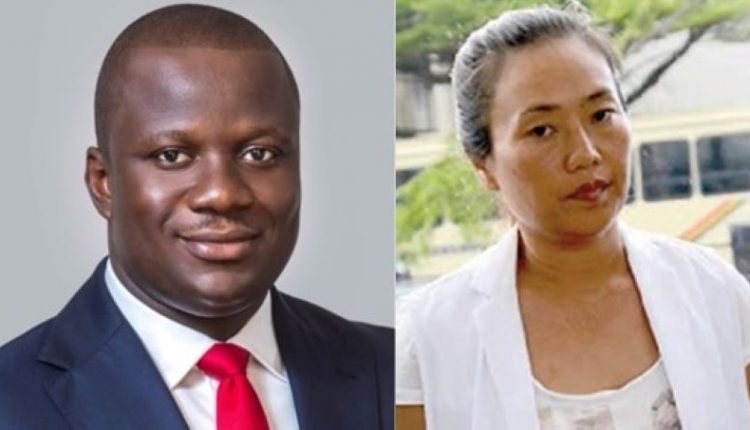 Lands and Natural Resources Minister, Samuel Abu Jinapor has assured that ‘Galamsey’ queen Aisha Huang will be convicted and imprisoned in a Ghana jail if found guilty of the charges against her.

Samuel Jinapor said this would be possible due to the government’s legislation and policy intervention such as Act 559 which has been amended to proffer stiffer punishment to persons found guilty of illegal mining.

The Minister while speaking to journalists in Accra said per facts in his possession, he is convinced Aisha Huang is guilty of the charges proffered against her.

“Aisha Huang has been arrested today. She is being prosecuted and she will be prosecuted under Ghanaian law in Ghanaian court if she is found guilty which I believe she should be found and I think I am not making prejudicial comments but I am saying that given the fact that I have, I am expecting that Aisha Huang will be found guilty, convicted and sentenced and thrown into Ghanaian jail,” he said.

According to Samuel Abu Jinapor, the fight against ‘galamsey’ does not focus on Aisha Huang as it is been projected.

He said other 154 persons of different nationalities have also been arrested which is a testimony to the government’s fight against the menace.

“The assumption that the President’s whole might and effort revolve around Aisha Huang [not true],” he added.

Reacting to the Minister’s assurance to prosecute Aisha Huang, Executive Director for the Media Coalition Against Illegal Mining says the government must demonstrate its will by seeing through the prosecution of persons, especially, foreign nationals who are found culpable.

Ken Ashigbey in an interview on Top Story, Tuesday, indicated the need to translate the rhetorics into action.

“There is no better story to be told than that…We have heard the President speak and now we’re hearing the sector Minister speak. We’re not going to take their word for it,” he said on Joy FM.

The Chinese national who is set to reappear in court on September 27 was accused of engaging in mining without a license after she was re-arrested in Ghana some weeks ago.

This was after she was deported back in 2018 over a similar incident.

Though the nature of her exit is still being debated, the Attorney General has already communicated his support to see the prosecution through.

You Have Until Sept. 24 to Claim Part of $100M Google Photos Privacy Settlement