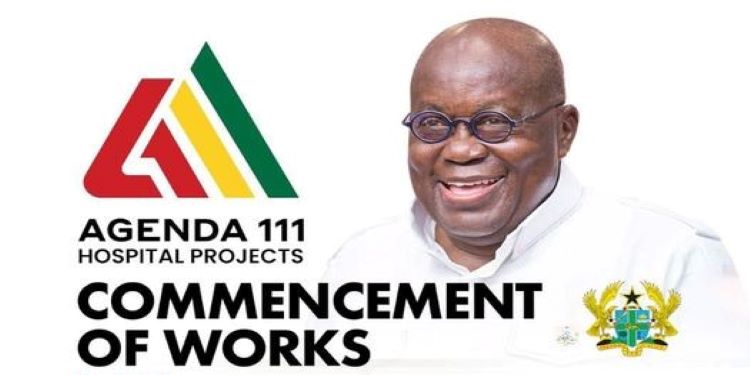 President Akufo-Addo has today, Tuesday August 17, 2021 at Trede in the Atwima Kwanwoma District of the Ashanti Region cut sod for the commencement of 111 hospitals dubbed “Agenda 111”.

Agenda 111 involves the construction of 101 hospitals in each of 101 districts in the country currently without district hospitals, 7 regional hospitals for the newly created regions including a new one for the Western Region and 2 psychiatric hospitals for the Middle and Northern Belts and also the rehabilitation of the Effia-Nkwanta Government Hospital in the Western region with all expected to be completed within 18 months.

Reacting to this on Facebook, Lawyer Akwasi A Afrifa Akoto, a private legal practitioner has stated that Agenda 111 would be abandoned post 2024 regardless of who would be in power.

Without commenting on the president’s statement that each of the 111 hospitals would be completed within 18 months from the day of commencement, Mr. Afrifa Akoto Wrote, “Agenda 111 would be abandoned post 2024 regardless of who would be in power, NDC or NPP, Alan or Bawumia”. To him the president should have rather concentrated on the projects he had already started with “90% still to be completed” as that would have meant the president would now be commissioning projects initiated in his 1st term. 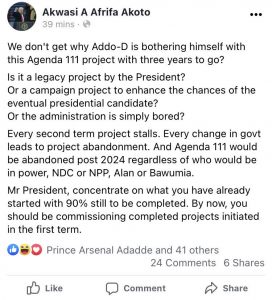 Agenda 111: Facilities to expect in each hospital