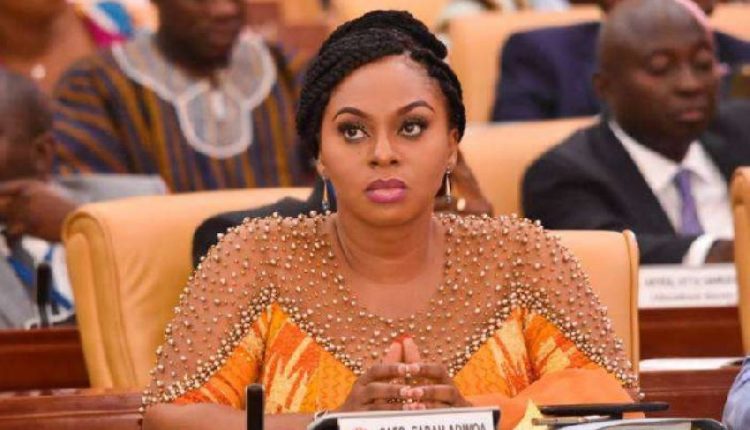 An aide to the Dome-Kwabenya Member of Parliament has said the legislator is expected to be in the country this week, barring any last-minute changes.

According to him, Sarah Adwoa Safo will resume her duties in Parliament and the Gender Ministry once she arrives in Ghana.

He is confident residents of Dome-Kwabenya will support their MP to thrive and succeed.

“I will say, this week we will hear from her. As in we will see her,” he said in a response to a question on when Adwoa Safo will be returning.

A recent Facebook post by the Gender Minister left many wondering whether she is returning to the country or not.

She shared photos of herself in what appeared to be a private jet while looking excited with cheerful smile.

“You prepare a table before me, in the presence of my enemies. You anoint my head with oil; my cup runs over,” she quoted Psalm 23:5 in her caption.

Social media users, among other wishes, prayed for a safe journey and said they cannot wait to see her resume her duties.

In an interview with Accra-based Okay FM on Monday, July 25, her aide Nana Dubin Kwapong said he has been engaging the Clerk of Parliament over the prolonged absence of the legislator.

“She hasn’t indicated to me that anyone did something to her for her to stay away from Parliament. She wrote a letter to the President last year [in] August asking for time to attend to personal issues.

“The President and Chief of Staff graciously granted her request. The people still love her and, certainly, I believe if she comes and wants to contest again, the party and the constituents will support her,” he added.

The legislator earlier opened up about the ordeal she is facing in the ruling New Patriotic Party (NPP).

According to her, she has become a victim of a sustained political witch hunt by certain elements in the NPP and in Parliament for their own parochial goals.

She expressed shock about how she is being treated differently by people, including members of her party for staying away from official duty in order to attend to personal issues involving her child.

She said she had sacrificed a lot including her family for NPP but she is now being described as a traitor, “and there are schemes to oust me from my position as MP and Minister.”