The Bank of Ghana (BoG) has described as false and unfounded some allegations made by Member of Parliament for Bolgatanga Central, Isaac Adongo.

According to the central bank, “the allegations are aimed at impugning the hard-won credibility of the Bank of Ghana and its Management”.

“The Bank of Ghana’s attention has been drawn to a press engagement by the Member of Parliament for Bolgatanga Central, Hon. Isaac Adongo, on 8th November 2022 during which he provided some false data and made unfounded allegations,” a statement from the BoG said.

The statement recounted that the MP alleged that the Bank of Ghana had “illegally” financed government to the tune of GH¢70 billion or more since 2021. This response is to present the facts. 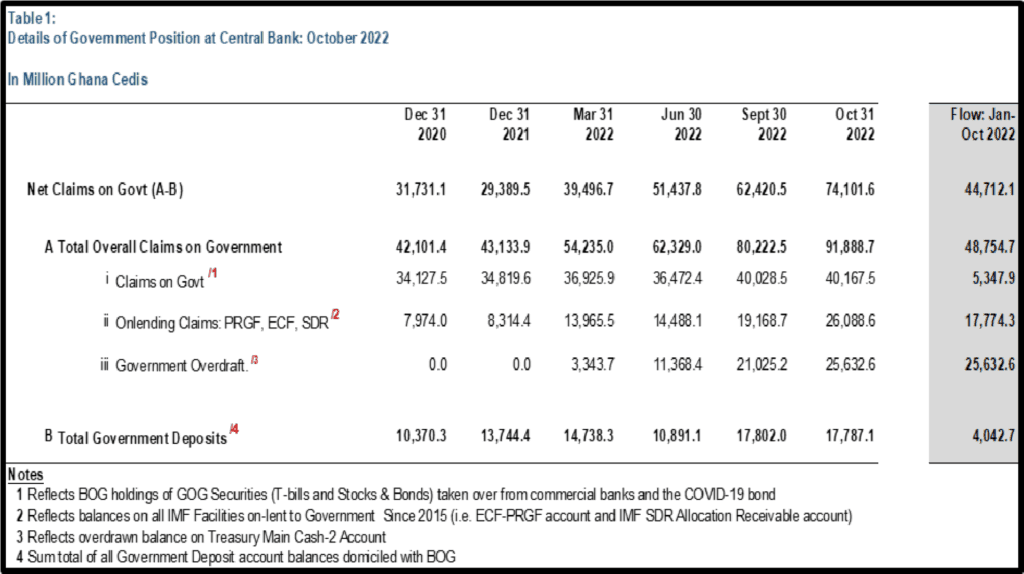 A (i) Claims on Government

The claims on government represent the stock of debt held by the Bank of Ghana and reflect accumulated claims for over twenty years, including legacy assets such as the Telecom Malaysia Bonds issued in relation to the privatization of Ghana Telecom and Tema Oil Refinery Bonds. At the end of December 2020, the claims on Government stock position stood at GH¢34.1 billion and includes the GH¢10 billion Covid-19 bond purchased by the Bank of Ghana. It would be recalled that in 2020, a request was made by the Government, through the Minister of Finance, to suspend the Fiscal Responsibility Act due to the Covid-19 pandemic. This was approved by Parliament together with the trigger of Section 30 of the Bank of Ghana Act, 2002 (Act 612) as amended, and paved the way for the Government to issue a Covid-19 Bond which was purchased by the Bank of Ghana at the policy rate, with moratorium of two years.

At the end of December 2021, claims on Government rose to GH¢34.8 billion, and have recently risen further to GH¢40.2 billion at the end of October 2022, reflecting an increase of GH¢5.3 billion in 2022, which was the result of pre-mature unwinding of positions held by some banks.

On lending claims are facilities granted by the International Monetary Fund (IMF) for onward lending to Government by the Bank of Ghana. IMF instruments and resources have been redesigned to provide budget support rather than balance of payments support, including recent resources from the ECF programme with Ghana and the RCF that was provided during the Covid-19 pandemic, and are therefore on-lent to the Government. These are denominated in US dollars and revalued in line with exchange rate changes. From the table, these claims have increased by an amount of GH¢17.8 billion from beginning of the year to October 2022. This reflects a revaluation of these claims in the Bank of Ghana’s books to account for exchange rate developments. This figure does not reflect Bank of Ghana’s lending to Government but rather resources from the IMF that were required to be passed on to Government in line with approvals by the IMF Board. And the increase in the amount in 2022 does not reflect new cash transactions but rather merely a book-entry figure, driven in large part, by the depreciation of the currency.

Government overdraft is a short-term bridge financing to the budget. The devastating after-effects of the pandemic worsened the fiscal position in 2021, as Government struggled to meet revenue targets to help with budget implementation.  Even though there were intermittent short-term liquidity extension by the Bank, consistent with the Law to enable the Government fund its expenditures, the Government fully paid back its indebtedness to the Bank of Ghana by the end of 2021. This is evidenced by the Zero overdraft position at end 31st December 2021 in the table above.

In the first quarter of 2022, Ghana’s credit rating was downgraded and effectively shut out of the International Capital Markets. Consequently, there were no inflows from external sources to support budget implementation and the government started experiencing unsuccessful auctions on weekly basis. In the process, the Bank of Ghana had to step in and provide financing to keep government machinery running, and in particular, help prevent a domestic debt default situation. This activity is clearly shown in the Overdraft line in the table, which stood at GH¢25.6 billion as at October 2022. This support is temporary and consistent with crisis management as we work with the International Monetary Fund to design a debt operation that will lift the burden of debt servicing off the budget. The central bank has been transparent on these issues as spelt out in the September 2022 MPC Press release.

Bank of Ghana’s Swaps, Repurchase Agreements and Sale Buy Back

Last but not the least, Honourable Adongo also raised the issue that the Bank of Ghana has illegally borrowed US$7 billion through bridge financing, swaps, repurchase agreements etc. and therefore seeking funds to refinance this amount.

The total outstanding Swaps, Repurchase Agreements and sale and buy back transactions stood at US$2.4 billion at end October 2022, of which only US$720 million is expected to mature by the close of the year.

We wish to assure the public that the Bank of Ghana is a reputable institution, which is professional with high standards. We have been recognised and awarded internationally on this score and all operations and policy decisions of the Bank are conducted with a high sense of duty and integrity to the best interest of the economy.

Kyei-Mensah-Bonsu to be Finance Minister?