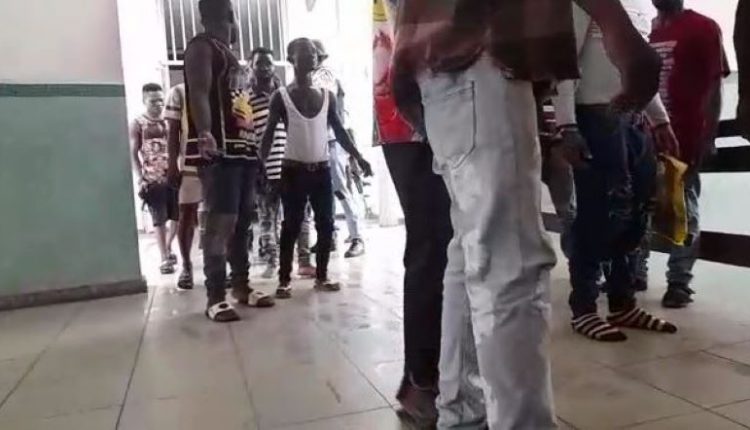 A total of 30 young men have been arraigned and charged for allegedly invading the Neoplan Police Station at Kwame Nkrumah Circle and in the process vandalizing the charge and the charge officer’s office.

They are said to have stolen two AK47 rifles belonging to the police. The 30, were on Wednesday, October 12, charged with four counts including two counts of conspiracy, unlawful damage, and stealing.

They all pleaded not guilty to all charges before the Circuit Court in Accra presided over by Her Honour Mrs. Afia Owusua Appiah and have been remanded by the court to reappear on October 26.

Chief Inspector, Samuel Ahiabo, the Prosecutor had prayed the court to remand the accused persons on grounds that investigations are still ongoing to know the culprits.

The accused persons appeared in court without counsel.

Per the brief facts of the case as presented to the court by the prosecutor, Chief Inspector Samuel Ahiabo, were that all the accused persons have their respective occupations at Kwame Nkrumah Circle.

He said, on October 9, 2022, at about 7:50pm, one Isobar stole a mobile phone belonging to a young man and that when he was being chased, he jumped into the Odaw River to escape.

The Prosecutor said, the young man, (victim), also jumped into the river to retrieve his mobile phone from the said Isobah but in the ensuing struggle over the mobile, Isobah got drawn.

Chief Inspector Ahiabo said, a friend of Isobah also jumped into the river, and he also got drowned.

The Prosecutor told the court that, on the same day, the accused persons organized themselves, marched to the Neoplan Police station, and attacked and vandalized the charge office and station officer’s office.

He said investigations are still underway.